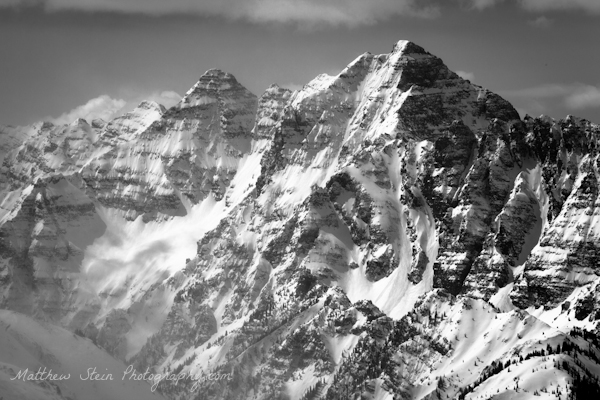 Adventure photography and snowboarding in Aspen

Your feet barely move without enormous force of will.

Once you finally get the next step up, shifting your weight onto that leg takes considerable effort. And there are still 2 summits left to the top. Why the hell would anyone lug 30 lbs of camera gear up here? Oh yeah, for shots like these.

Pyramid peak in Aspen Colorado. View from the top of Highlands

I love adventure photography. It combines my favorite outdoor activities with an artistic pursuit. Documenting the climbs, descents or other crazy activities that excite people makes for an interesting life. Usually I'm shooting some rock climbing, or cycling races. This time I decided it was time to venture out into the snow and get some winter sports under my belt. My friend Amy Ullman invited me along to her family's annual vacation in Aspen, Colorado and I couldn't say no. Winter sports here we come. 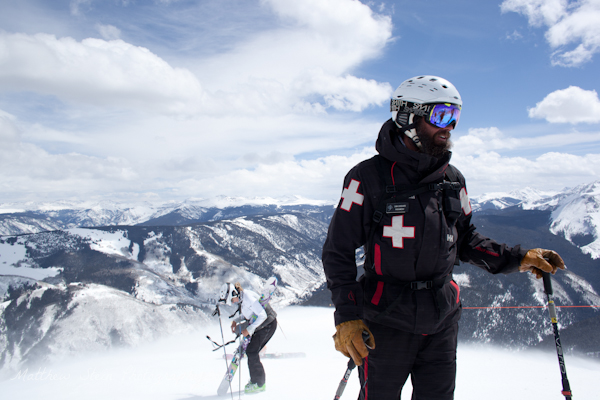 Ski Patrol on the summit of Highlands Bowl. Saving lives like a boss.

I've been snowboarding on and off for 12 years. When I moved up to Boston in 2004, it opened up a new class of mountains for me to explore. North Carolina is home to the country's worst skiing, but at least it's a starting place. They have a few mountains covered with white stuff you can slide down. But, it's nothing nearly as satisfying as something approaching real snow. Riding in the north east I've gotten used to fast runs down steep, icy slopes. Occasionally we'll get a fresh storm and have a powder day. Even on the best of those, my friends who skied out west would be quick to remind me "This is still nothing compared to Park City, Aspen, Breckenridge" etc. It was time I tried this mysterious west coast experience for myself. I eagerly jumped at the chance to go.

The first day I wanted to see what the hype was all about. I left my cameras in the room, and we rode Ajax mountain all day. It was cold. Damn cold. Single digits cold. I wore almost everything I brought, and was only warm half-way down the runs. Gondolas were a welcome respite from the wind.

The snow was fantastic. Bumps out west are nothing like bumps on the east coast. They're softer, almost inviting, even for a snowboarder. Not like the icy, hard lumps waiting to catch an unsuspecting snowboarder and send them tumbling ass over tea kettle. The groomed trails carved like a dream. Steeper ungroomed trails were covered in big pillows of snow that allowed for soft landings and turns. The snow was only a few days old. Not quite fresh powder, I could still see what was so captivating about this place. 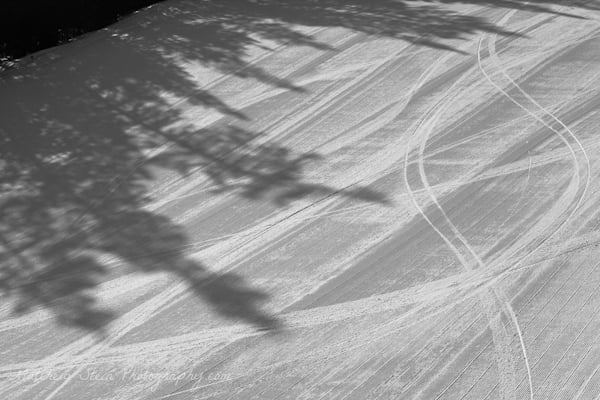 Groomed trails in the early morning on Ajax Mountain.

The next day, we decided to hike the Highlands bowl. As pumped as I was, I only had an idea of what I was in for.

My feet weighed twice as much as usual. Each step was small, yet I still had to catch my breath in between each one. The air may have been clear and crisp, but it sure was hard to find at 12,400 feet. I wasn't hiking alone. Amy and I had coaxed each other into doing this, neither of us daring to back down. We weren't alone. A train of hikers stretched across the ridgeline. Everyone was hiking in their ski or snowboarding boots, carrying their boards or planks on their back. I was the damned fool also carrying 30 pounds of camera gear as well. My Canon 5d body, 2 lenses, 24mm and 70-200mm, and a tripod all fit in a well padded Kata bag. That didn't make them any lighter.

After taking the ski lift to the top of Highland peak, we started the hike. A snowcat runs part of the way and can cut another half hour out of the hike, but we skipped that opting to use our legs instead. The hikers in front of us stretch out like a train of ants crawling across the ridge line. 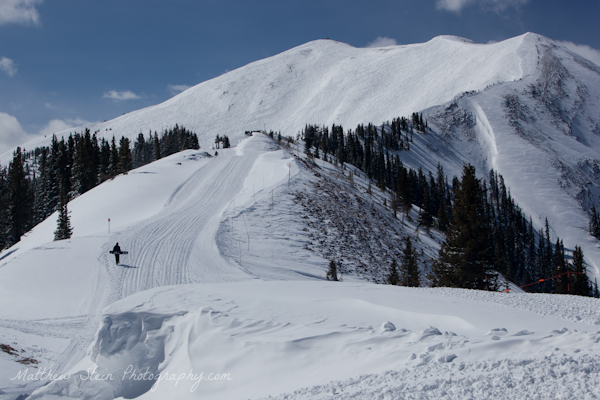 Fortunately we had nice weather. Mostly clear skies and winds that came and left gave me enough atmosphere to make these shots interesting. Walking up the ridge, you're surrounded by white snow, and a blue sky. Red rocks dot the landscape, their tips poking through the snow. It feels like a wintery version of Mars, far from everything you're familiar with. So many pictures of the Rockies are in classic black and white. The muted colors of high altitude flora don't always stand out as well in color. I couldn't let this martian landscape pass me by without documenting it to share. Amy was kind enough to pose next to a larger rock while we caught our breath. 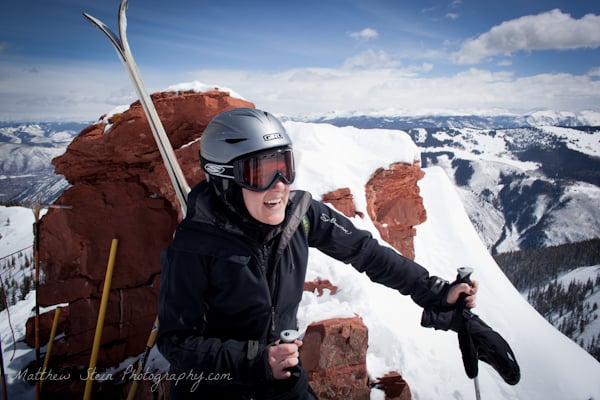 Amy laughing on a quick photo break during our ascent

Approaching the summit, the wind really started to pick up. Blowing snow and thin clouds crossed over the trail. Blown powder spun in circles as the updraft came into view. We approached the penultimate summit. Our goal was within easy sight now. What started as tiny ants on a distant hill were now people celebrating their completed trek. Soon we would be among them. 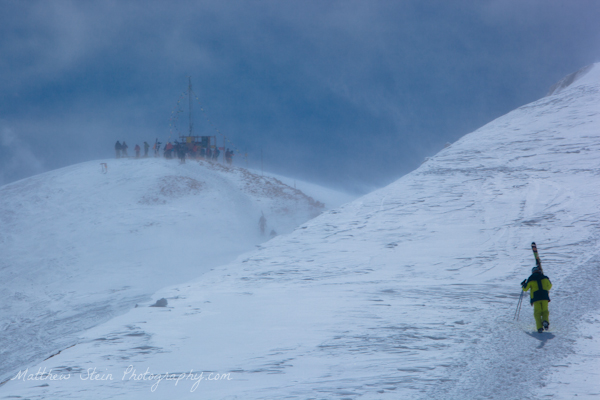 Wind picks up as we approach the summit

On the summit, a sense of jubilation is shared among everyone. The bond of camaraderie only comes from shared suffering or accomplishment. The views are fantastic, from all angles. Majestic peaks surrounded us on all angles, with miles of visibility. Along with the views, were the warning signs. Reminders of the danger we faced should we decide to drop in on the wrong side of the mountain. 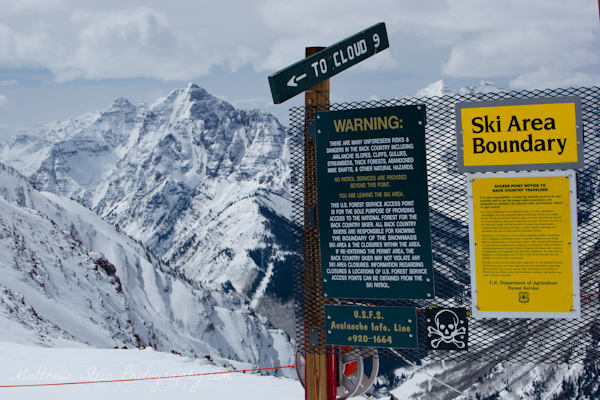 Big warning signs. Don't cross or they won't rescue you.

This is what I came for, so I took my time getting the shots I wanted. First, I covered the distant landscape shots. Then a few candids of people enjoying their accomplishment. It's a good rule of shooting to get the basics in the can early. That way, no matter what happens those are covered. Next, I could move on to more interesting shots. I hear some commotion behind me back up on the summit. A few ladies had crossed the out-of-bounds line. They stood with their backs to the crowd and took their tops off, bearing all to the mountains before them. I repositioned and kept shooting. It pays to be prepared. Everyone had their camera phones out, and were shouting words of encouragement to these ladies. I love how the curve of the ridge line framed this shot. 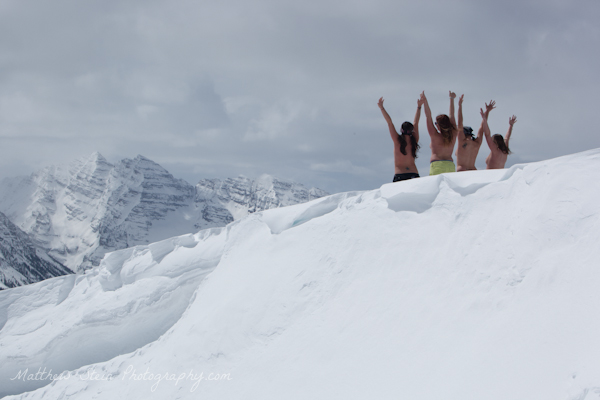 Then came time for the other reward of the hike. The ride down. Jim Richardson has sage advice for people who want to take better pictures: "Stand in front of more interesting stuff." Sometimes you have to work a little harder to get there, but that's half the fun.