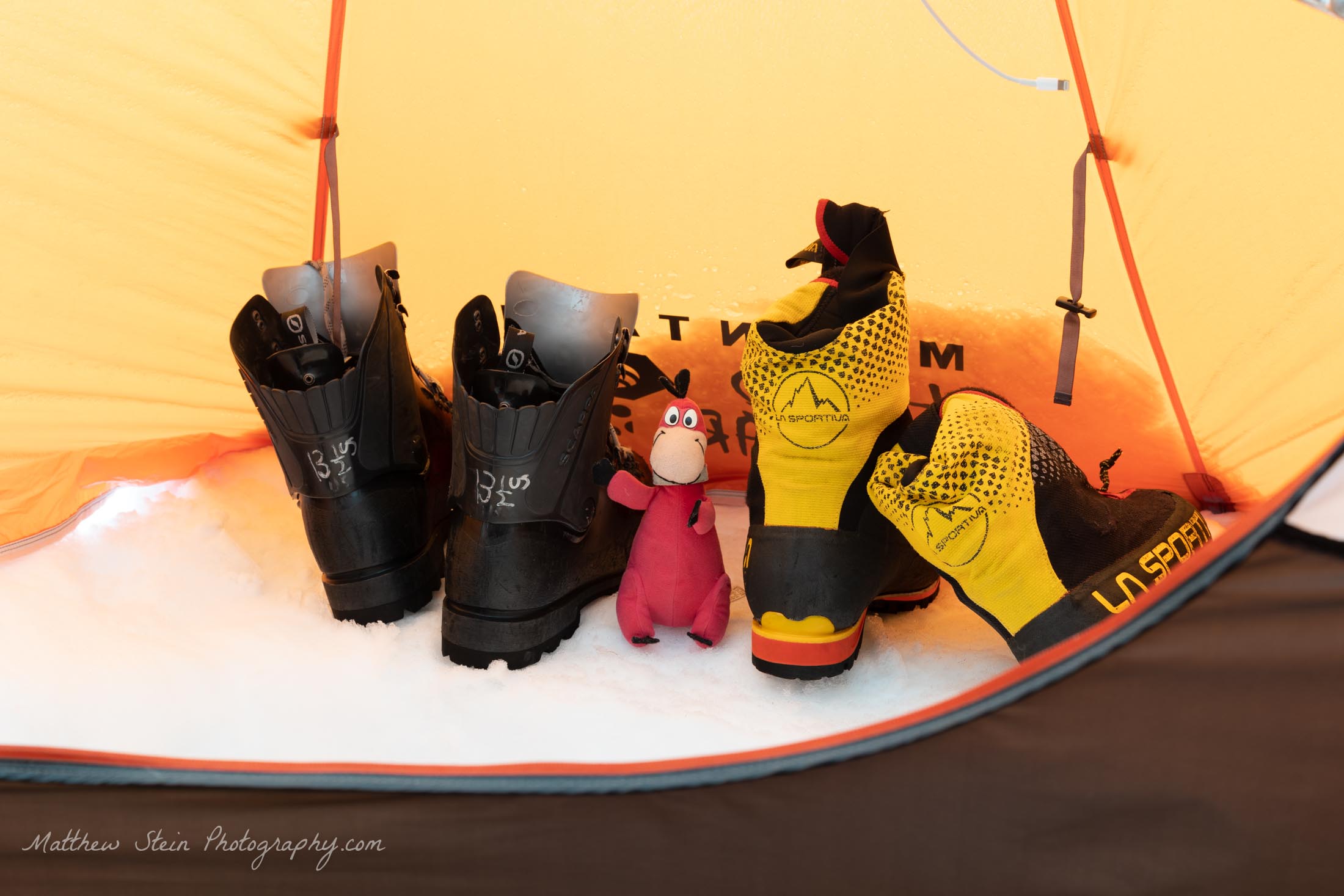 Mutiny on the mountain.

This was the coldest morning yet. The wind was still howling, but the direction was supposed to have shifted.

2-sleep Mike delivered thermoses for hot drinks and collected bowls for breakfast. He told us to sit tight and stay warm. When he delivered breakfast (hot granola and a pop tart) he said we could start organizing our stuff to pack up. The winds were blowing in the right direction.

I threw all my gear to pack into my tent bag. This time I would wait until out tent was broken down so I could pack more efficiently. We were told to wait in our tents until the sun crested the face of the West Buttress so it would warm up. I packed my inflatable sleeping pad and sleeping bag and sat on my foam pad.

Even in my tent I was still cold. Thick socks, boot liners, down booties, heavy weight long johns, shell pants, puffy pants, lightweight base layer top, puffy vest, down jacket and parka, ski gloves and my warm hat. Inside my tent and I'm still cold. It must have been low single digits inside. Ice crystals falling from the tent ceiling didn't melt. My finger tips hurt from the cold, so I tucked them in my arm pits, inside my jacket, gloves and all. I wanted to get out my book but it was too cold to turn the pages.

At 10:30 we heard camp rumors of a mutiny. One of the guided trips had their climbers break camp and they were sitting in their packs. Apparently the climbers gave their guides an ultimatum. 'Either we start climbing now, or we're going to leave and go back down to the airstrip.'

In case you're not sure, that's a very bad idea.
It was the talk of the camp.
.
By 11:30 they crested the top of Motorcycle Hill Android disappeared behind squirrel hill. We'll see how they fare.

I shot a video watching them get to the top of the hill, and showing the high winds blowing snow around camp.

At noon 2-sleep Mike told us we were officially calling it off for today. His friend at 14 camp radioed and said it was as bad as he'd ever seen it up there. He was almost getting frostbite trying to make pancakes.

We might upgrade him to 3-sleep Mike at this rate. Time to get comfortable again and get ready to spend another night here.

Later, I took out the little stuffed Dino that I've been carrying up the mountain. My friend Darren Garnick has been getting people to take picture with this Dino from the Flintstones for decades. Presidential candidates, Olympic Gold medalists, Miss America contestants, and many more posed for pictures. Other people have taken it on trips. Dino summited Mt Kilimanjaro, so it's officially visited 2 of the 7 summits. I brought it with me on a rock climbing trip to Spain. There Dino played with the pigeons in the Plaza de Cataluna in Barcelona.

Today however, Dino was trapped in the tent with us. He posed next to our boots in the vestibule of our tent. Rhude Dog's rentals, and my La Sportiva G2's.

A Chinook flew across the Kahiltna pass, but I couldn't get out of my tent quickly enough to get a shot of it.

I visited briefly with our AMS neighbors to the Southwest. They built wind break snow walls around their tents. Yesterday was their back carry day to get their cache from below. Now they're on the same wait-and-see schedule as us. We're one day ahead of them since our guides dropped a cache around windy corner a few days ago.

Lunch in my tent was a half a bagel with peanut butter, some Genoa salami slices, baby bell cheese, Robin's eggs Easter candy, and a peppermint patty. My food options are starting to look monotonous. I didn't write down what dinner was that day.

Dino hanging outside our tent in the vestibule. Rhude Dog rented boots for this trip, and I was rocking the La Sportiva G2s. 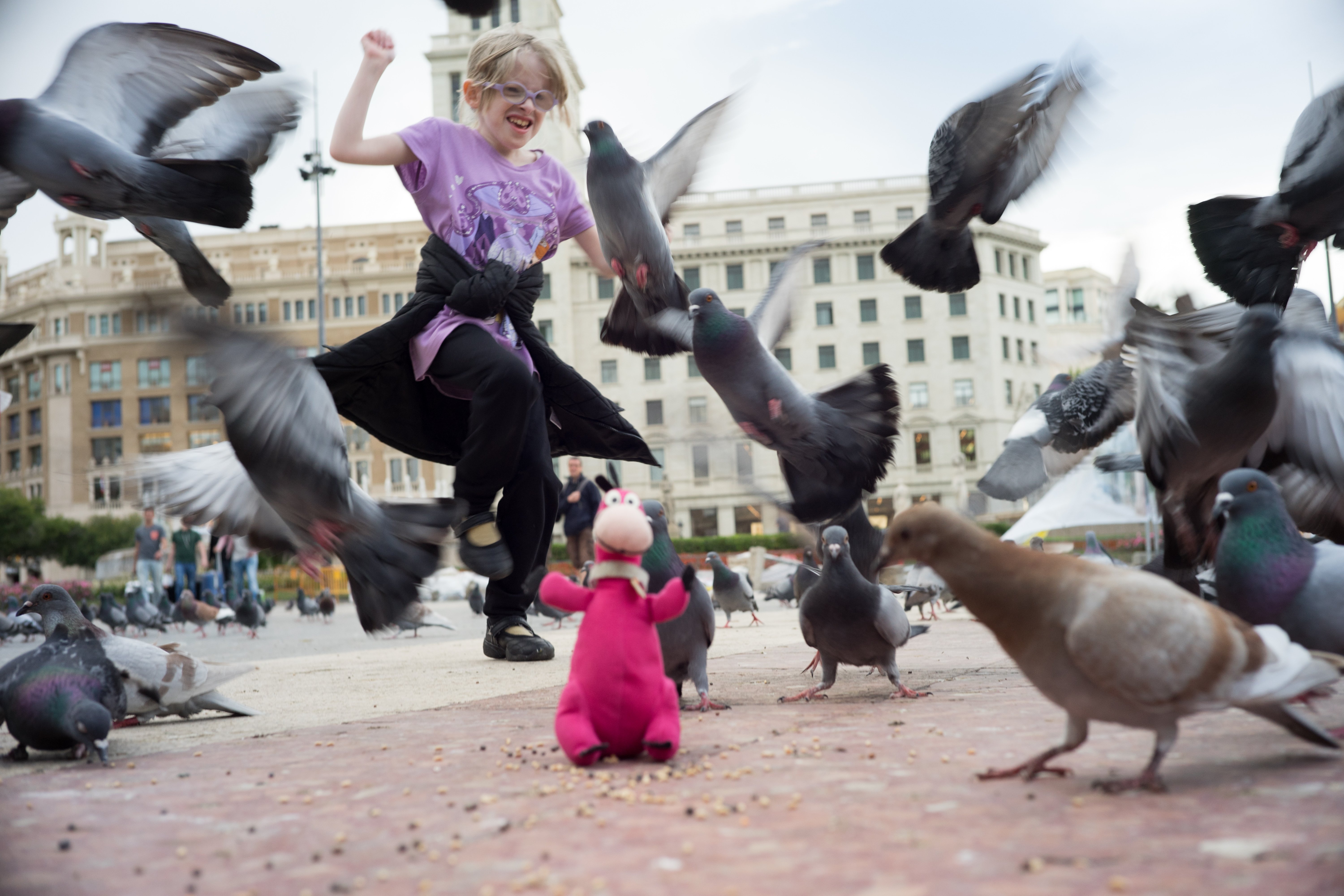 Dino hanging in Barcelona with the Pigeons

Dino on belay in Margalef

Ice falling from the inside of my tent. You can see it covering my  camera bag and part of my foam sleeping pad. 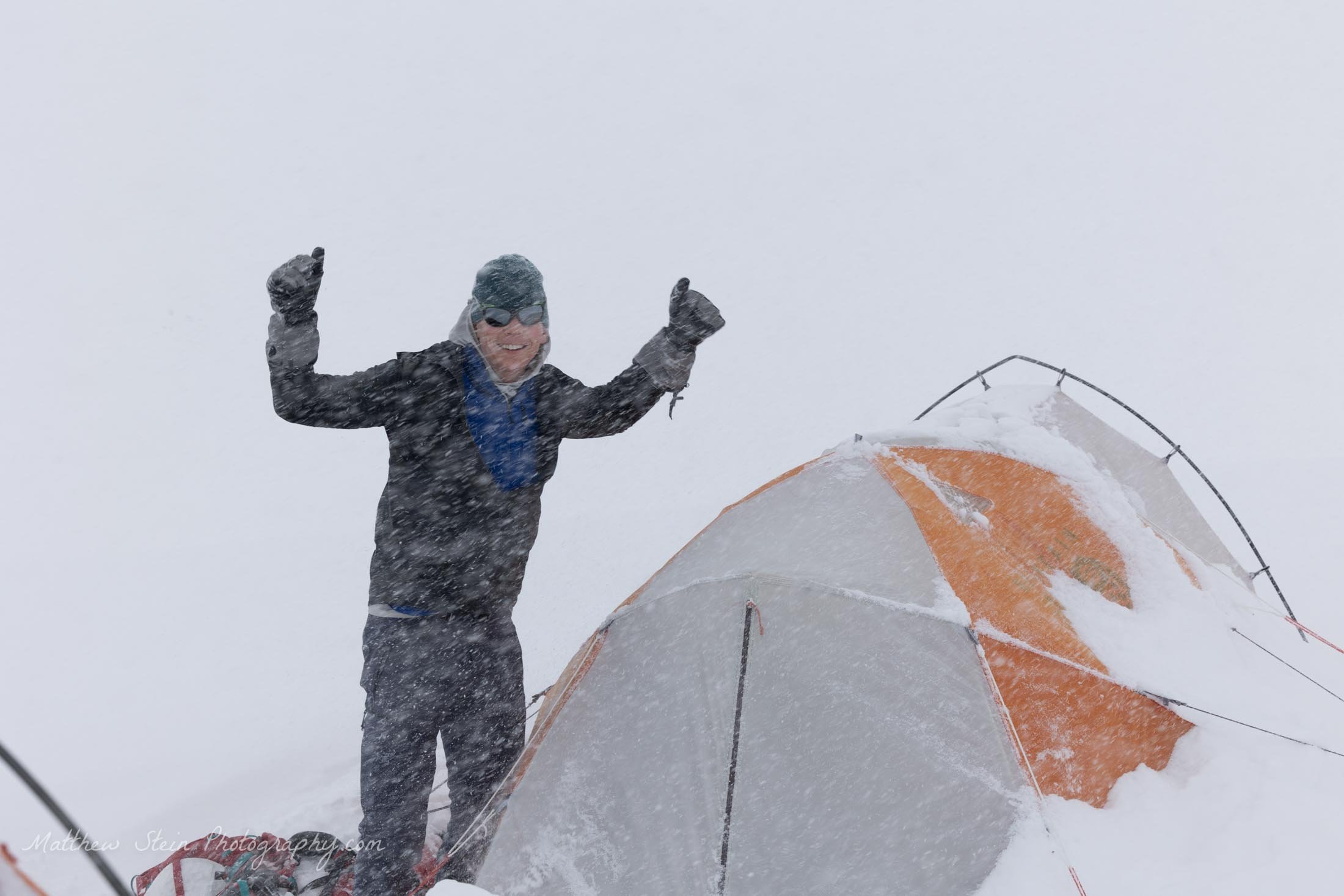 Another climber celebrating making it out of his tent in the morning.