We woke up around 7, breakfast was oatmeal and a pop tart to crumble into it. After that it was time to pack up, rope up, step off. We were heading out by 9.

Ascending Motorcycle Hill, we got stuck behind a slower group just ahead of us. Then, as we were heading up, the entirety of 11 camp poured out behind us. I got a few shots of the conga line stretching back into camp.

At the top of Motorcycle hill, we turned right, and went up Squirrel hill. It's still steep and side hilly. We were just down from the ridge line, and our direction of travel is not parallel with the direction of fall. We had a good look at a couple of crevasses visible beside the trail.

At the top of Squirrel hill, we turned to go up the Polo field. I was disappointed. There were no horses in sight, no pitch lines painted on the snow. No way to play polo at all. Instead it was another hill to climb. It wasn't steep, but there was evidence of an avalanche across the trail so we avoided that by going around it. We saw more little crevasses directly next to the trail, fortunately no one fell in.

The Polo field ends when the terrain gets steeper, going up an unnamed hill. Most people nicknamed it FU hill. We took that up to windy corner.

Windy Corner was still as still can be. Virtually no wind at all. It made us all very glad we didn't mutiny yesterday like the other group, who got stuck going through rough conditions. Instead, we enjoyed sunny skies and a calm breeze.

We took a break at windy corner. The other two rope teams caught up with us. It's an interesting vantage point at windy corner. From there, you can look North down towards the Kahiltna Glacier beyond 11 camp. Or you can turn Southwest and look towards the Yentna river. There's a massive bowl downhill from the West Buttress ridge. Our path skirted the top of the bowl. We walked across wind scoured ice on a slant down to an ice fall. This was the first time feeling like we're doing some real mountaineering.

Halfway across the bowl, we stopped to retrieve our cache.  Then we had one last slog up to 14 camp. We moved fast, I was redlining, but we made it. A previous AMS camp was available so we moved into their existing platforms.

Eat. Drink. Recover. Then we took our time setting up the tents.

Dinner was cheesy penne, I couldn't finish the bowl of seconds Clark delivered. It was too much.

I took 3 ibuprofen, and hoped I would be warm enough sleeping. The temperature was approaching zero degrees overnight. I finally broke out my heavy base layer top to sleep in. Booties too. Once the sun went down behind the wall around 9, it got cold fast. 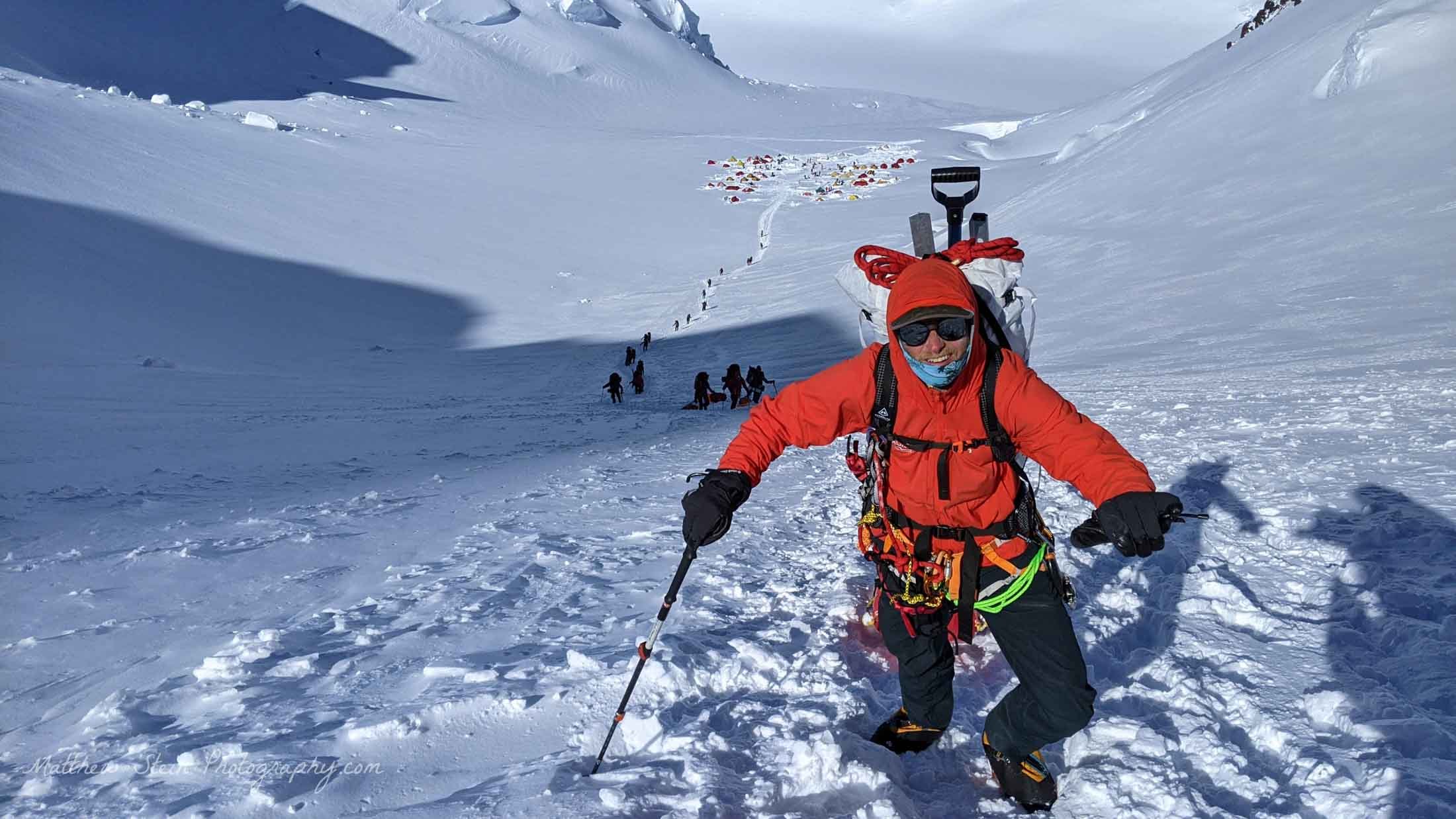 Clark heading up Motorcycle Hill, with the Conga line stretching back to 11 camp.

Other teams coming around windy corner.

Wind scoured ice. Not really steep, but you don't want to slip and fall down it.

Peggy, Canada Mike and Sam climbing with a view of the Yentna river in the background. 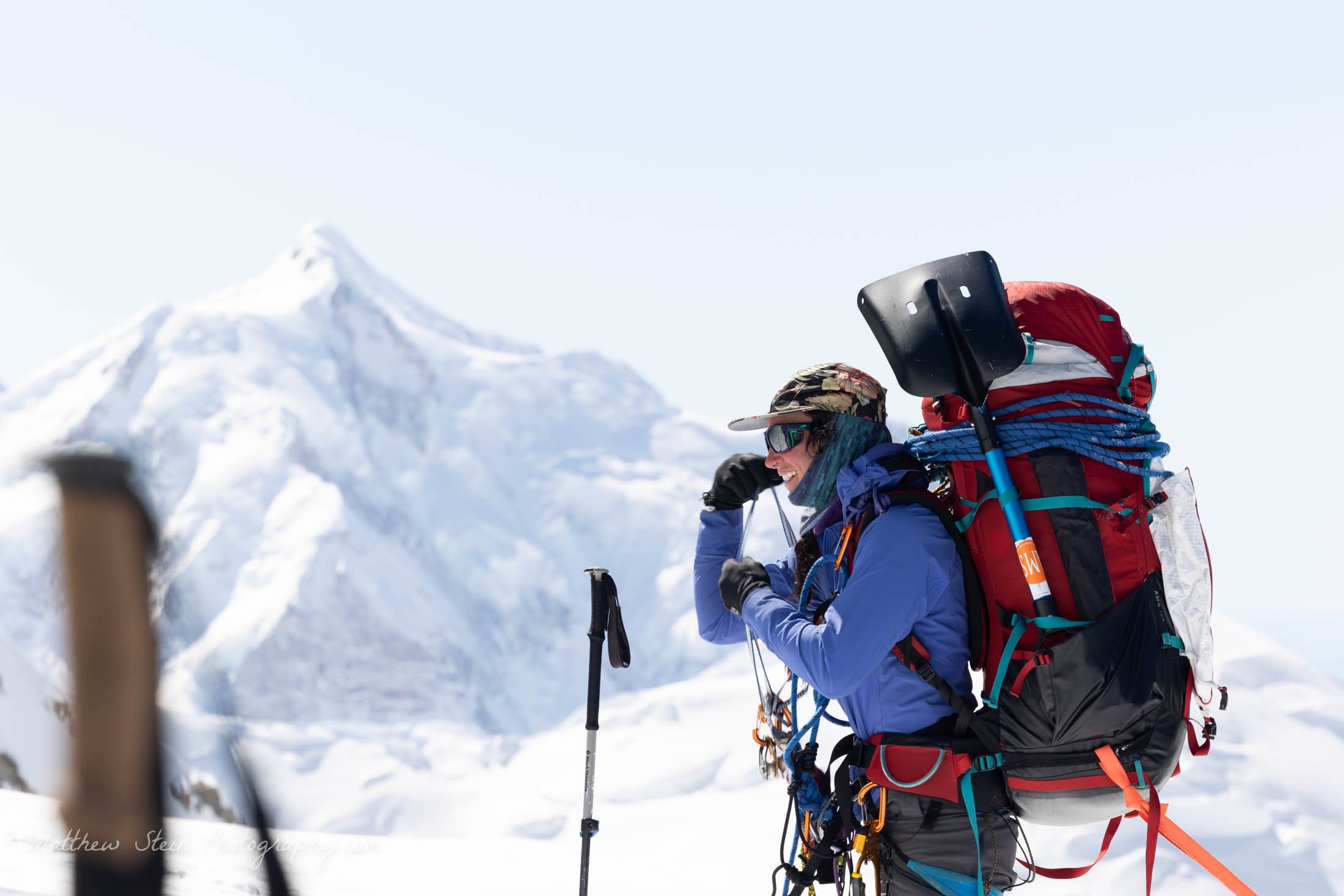 Another AMS guide with Mount Hunter in the background. 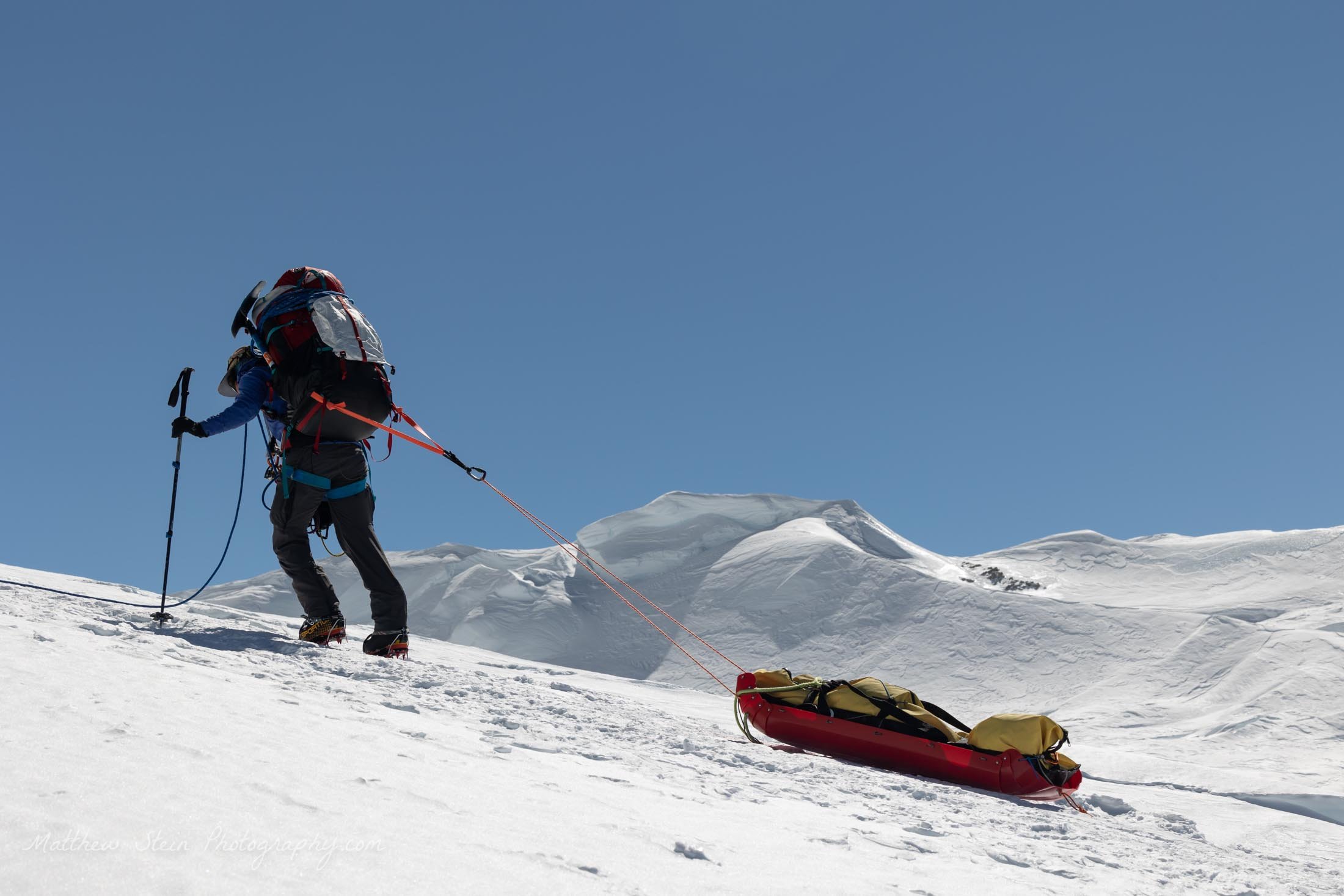