Today was the first Saturday in twelve days. Well, not really. In the rest of the world it was Tuesday. Today was our first full rest day with nothing to do.

We woke up at a lazy 9:30 or so. Well, I had to get out of bed around 7:45 to use the CMC, but I got back into bed for a while longer. It was damn cold and blowing spindrift. It's not the conditions to sit around surfing my phone while on the can.

After waking up the second time we checked in with the other groups and talked with the guides for a while.

3-sleep Mike was making potato pancakes listening to some great blues. Breakfast was his own invention. Crisp up some hash browns, pour a couple of pancakes, top them with some hash browns and a couple cubes of cheese. They're quite a bit more substantial than normal pancakes.

Peggy and Clark headed down for a grocery run with two of the guides from the other AMS team. There were a few supplies left at the cache below.

The rest of us prepared for a class. Today we learned 3 new skills. Ascending a fixed rope, descending the same, and going through running protection. It's a lot of very clear communication, unclipping and reclipping ropes and managing an ascender. It's not hard when the ground is flat and you have full use of your fingers.

It's another story when you're on steep ice, with a thousand feet of exposure below you, wearing huge mittens.

The trick for thick gloves is to avoid using your fingers to actuate the gate of the carabineer. Instead, grab it by the base, then twist it against the rope to unclip it. Similarly, push the gate against the rope to reclip it on the other side of the fixed protection. This takes practice, so practice we did.

If a team of climbers takes 10 seconds vs 2 seconds to reclip at each picket along several miles of fixed lines that can make the difference between a 12 hour summit day vs not making the summit at all. You'll have to turn around because you ran out of time. This isn't a 'fast and light' climb, but we still have to be super efficient.

During this, I got to talk with the 2 climbers from the other AMS trip. One of them works at Google in NYC. The other one works as a first mate on super yachts, sailing them around the world. Cool guys.

After practice, it was naptime again. Tomorrow we're going up the headwall, we need to be ready.

I started reading 'North by Shakespeare.' I've been on a fantasy kick, and this is quite a departure. Still, it's intriguing from the start and I'm looking forward to this one.

After a while I walked around 14 camp to take some pictures. No images can really capture the scope of the headwall, or most of the Alaskan mountains. Still, I walked all the way to the far side of camp, behind someone's snow wall and I was able to just capture it from top to camp. I took more pictures of Hunter and Foraker. Every 10 minutes the weather changes and I want to shoot them again. The winds really picked up and it was blowing spindrift all over camp. I moved closer to the center and shot a video tour of the camp.

Chris the Ranger was doing his rounds and asked me 'Are these your teams tents?'
"No I'm with AMS, just taking some pictures here."
"Oh my wife works with AMS. Which team are you on?"
"I'm with Mike Gardner's group."
"Oh you're in good hands. He's a great guy."

I have to agree.

Chris told me I should get up at midnight or 1am to get some shots of the full moon over Foraker, especially with the alpenglow of the midnight sun. Clark told me the same thing this morning. He showed me a few of the pictures he got. Damn. I have to do it now. Why did I haul this camera all the way up here if I'm not going to get those shots? That means heavyweight base layers, puffy pants, parka, hat and heavy mittens. And I'll have to sleep with the battery so it's warm.

Dinner was tortellini with Olives and sun-dried tomatoes cooked by Peggy. The olives were a great touch. I miss vegetables. Winds rocked our tents while we ate. 2-sleep Mike came around to give us the game plan.

Tomorrow we go for the headwall, weather depending. This is a dry run to make sure each member of the team is ready. We'll place a small cache, then come back down to 14 camp for the night. Next move is up the headwall and on to 17 camp. From there, it's the summit. Hopefully we get a good weather window.

A climber makes their way between tents fighting the winds and spindrift. 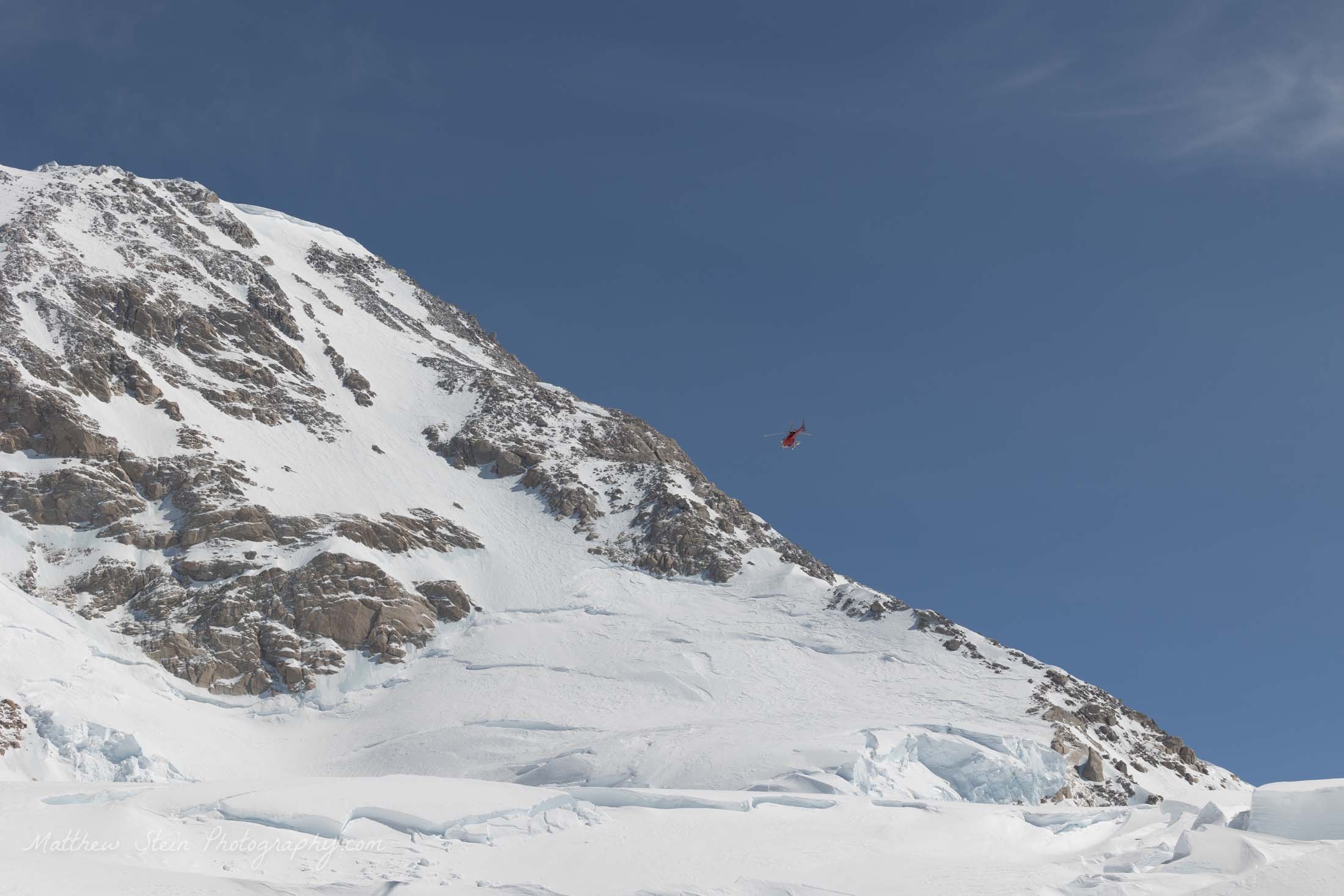 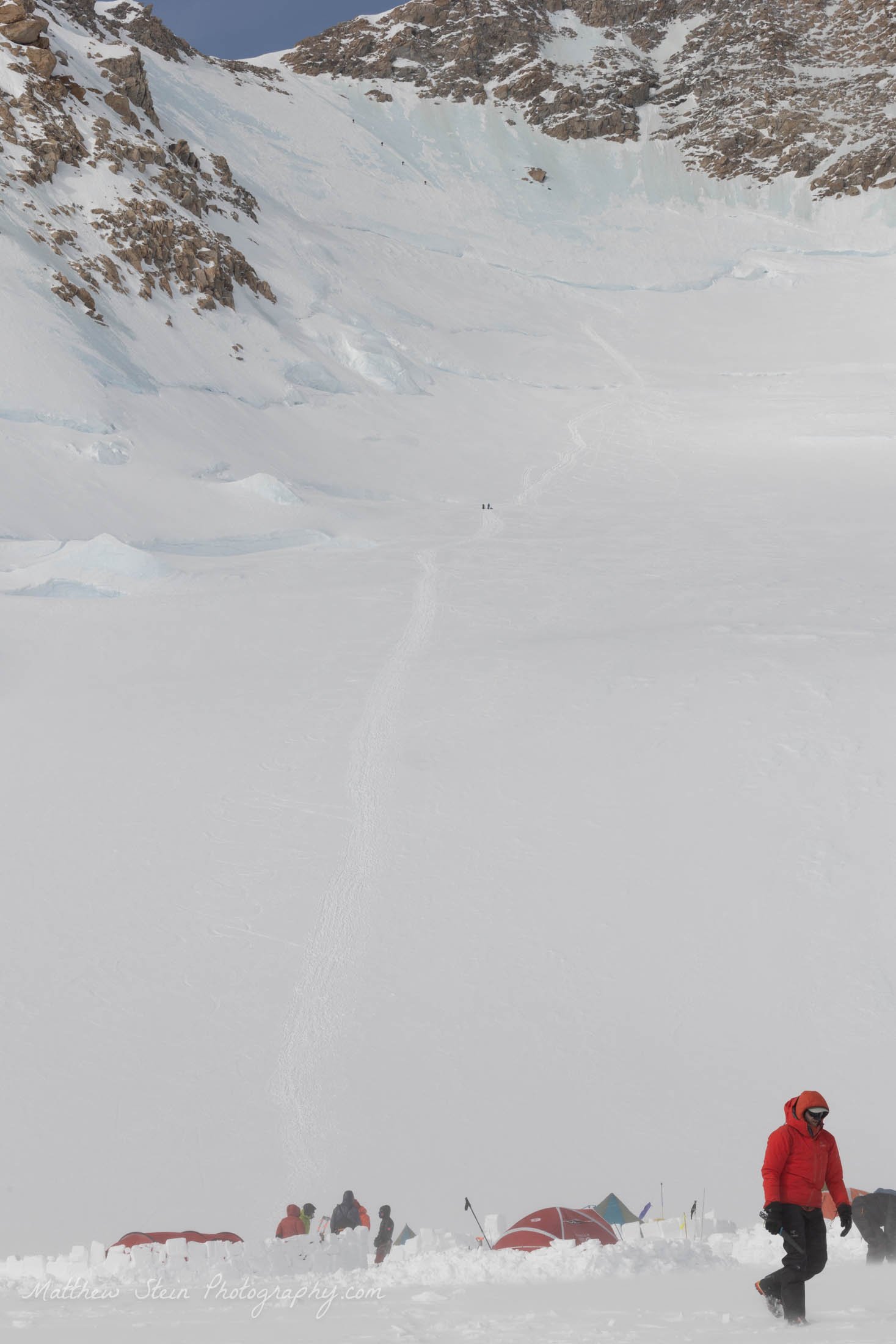 A shot of the headwall leaving 14 camp. Zoom way in and you can see 2 climbers 2/3rds of the way up, and 4 climbers on the fixed ropes at the top part of the wall. However big you think it is, it's probably bigger.