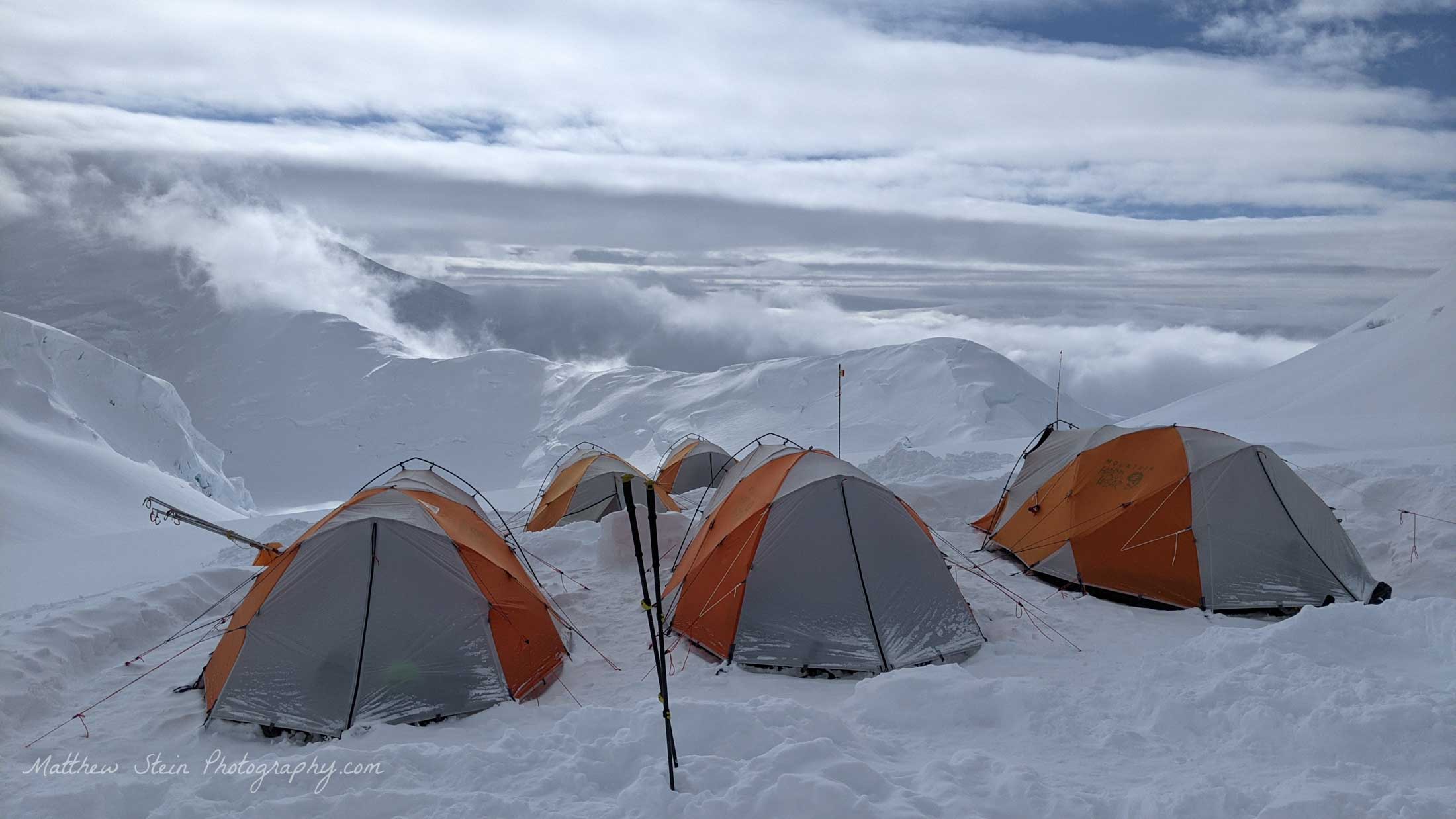 At 6:45 hot water was delivered to our tents. It feels like a nice luxury under these circumstances. It takes a lot of stove time to make hot water up here. Starbucks Via + Hot Chocolate mix makes a great camp Mocha. I like because it adds calories, which coffee doesn't have on its own. Hot chocolate mix needs conserving because I only packed some in my week 1 food bag.

Camp Mocha: 1 via packet and 2 heaping spoons of hot chocolate mix to 20 oz hot water. That's perfect for my Yeti thermos. (Thanks Diana!)

The wind was mellow this morning, but it was still quite cold. Ice on the inside of the tent confirmed that. Yet, not so cold that my breath froze on my sleeping bag.

I suppose I am living the dream.

Breakfast was a cheesy bagel with bacon again. I'm a fan.

2-sleep Mike told us things were looking better but we were still in a holding pattern. A few hours later around 10am, he said we can start pre-packing to go up, but don't break down the tents yet. Stay put and stay warm. Other teams started breaking down camp and heading out. The valley below was totally clouded in, light snow was falling and we couldn't see the face of the West Buttress. We would see if the trend of slower winds would hold. Hopefully in the warmest part of the day we could push through the wind and bitter cold without suffering frostbite.

At 11:30 we get the go signal from 2-sleep Mike. We pack our bags, breakdown our tents and get prepared to head out. Digging out these tent parachutes was a lot of hard work and more time consuming than I thought. Group gear goes into our bags. Ropes are uncoiled and laid out to clip in. We're all finally roped up with crampons on and 2-sleep Mike comes back from conferring with some other guides.

Other teams already up motorcycle Hill and on Squirrel hill are reporting harsh conditions. The trend of lighter winds has reversed. Hard. They're turning around. 2-Sleep Mike tells us we're not going up today.

"If we left now, we'd probably have to turn back like once we faced those conditions above. It's been marginal all day, and it's not worth it. We'd have a really taxing climb if we tried and we would get into camp late and cooked. I know it's frustrating to do all this work to break down camp and get all roped up. But, it's better to have another day here and be better rested than arrive late at 14 camp, have to set up tents and everything while exhausted and then struggle to recover at the new altitude. It could wipe you for the trip. I hope you guys understand."

It was a disheartening, but we got it. The decision made sense. And we had a good dry rehearsal of packing up and getting ready to head out. This would be our first climb sans sleds, with everything in our packs.

The guides helped us refine our tent setup technique a little more. These winter tents don't have straps and stakes, they have parachutes you bury in the glacier snow. Here's how our guides recommend setting them up. Bury the back chute first before tensioning and burying the front one. Once it's lined up, then you work on the sides. Adjust the fly straps last to get it tight like a drum. Make sure there's no snow around the base so there is air flow between the tent and the fly. That's why our tent was so wet on the inside. We had no airflow to dry it off. TKTK

We saw multiple rope teams retreating and coming back down Motorcycle Hill.

Sam practiced his hand stands in the snow. He's pretty good. If we make it to the summit hopefully I can get a pic of him doing a handstand on the summit.

We had moved back in to our tents as another AMS group came up hill from 7800 camp. They were in snowshoes and goggles. It was a full whiteout for them coming up. They probed a site and set up their tents out the front of our tents. We have neighbors now. The guides from our team helped their guides to set up to get them settled a little faster. That's the attitude in the mountains. We're here together with the same purpose, so climbers look out for each other.

I retreated to my tent to lie down and read more of The Lies of Locke Lamora and listened to some Aloe Black.

Dinner was rice and black bean burritos with cheese and hot sauce. Yum again. They toasted them in a pan that evidentially had some brown and crunch bits for extra flavor. Then they asked if we wanted seconds, so of course I said yes. If we keep eating like this and don't get to move up the mountain, I'm going to get fat.

We relaxed in our tents after dinner. The sun warmed them up to sauna temps. Rhude Dog and I vented our tent doors to cool it down a bit. I lay around wearing only long johns, no shirt or socks.

With the new group moved in down hill, we heard the guides talking, organizing and telling jokes.

"I think I'm going to cache my sunglasses."
"Yeah, that sounds like a good idea. Go for it."

Tomorrow we can put our packing practice to use and hopefully get up to the next camp, rested, fat and happy.

It's a bizarre feeling knowing that in an hour and a half, the temperature where you sleep is going to drop about 60 degrees. From 75 toasty warm, to 15 and literally freezing inside. Once the sun goes down, the temp drops quickly. How do you dress for sleeping like that? It's quite a challenge.

Sun peaking out over the West Buttress face and snow covered tents. 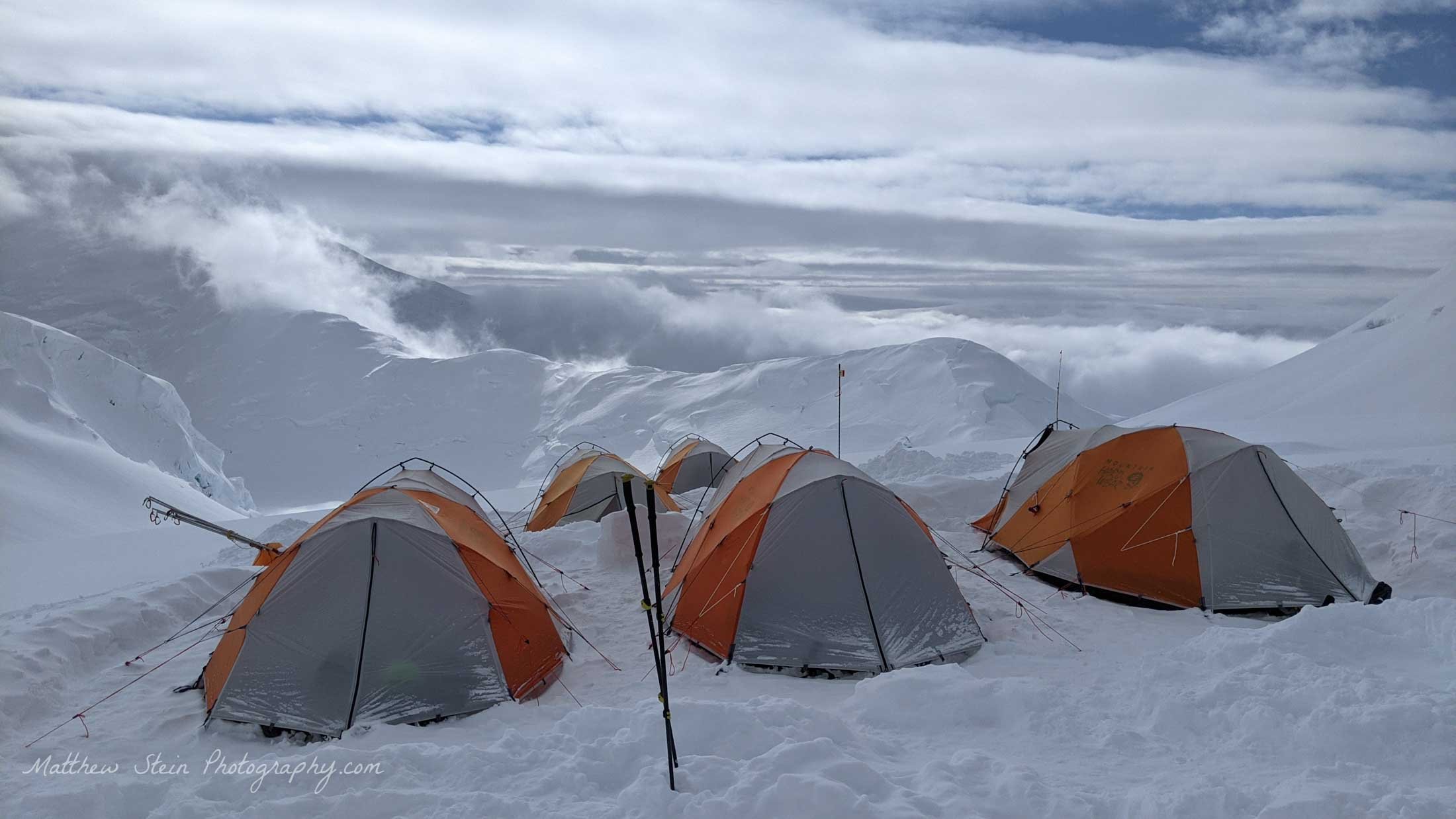 Our three tents, the new neighbors, and the Kahiltna ridge below. 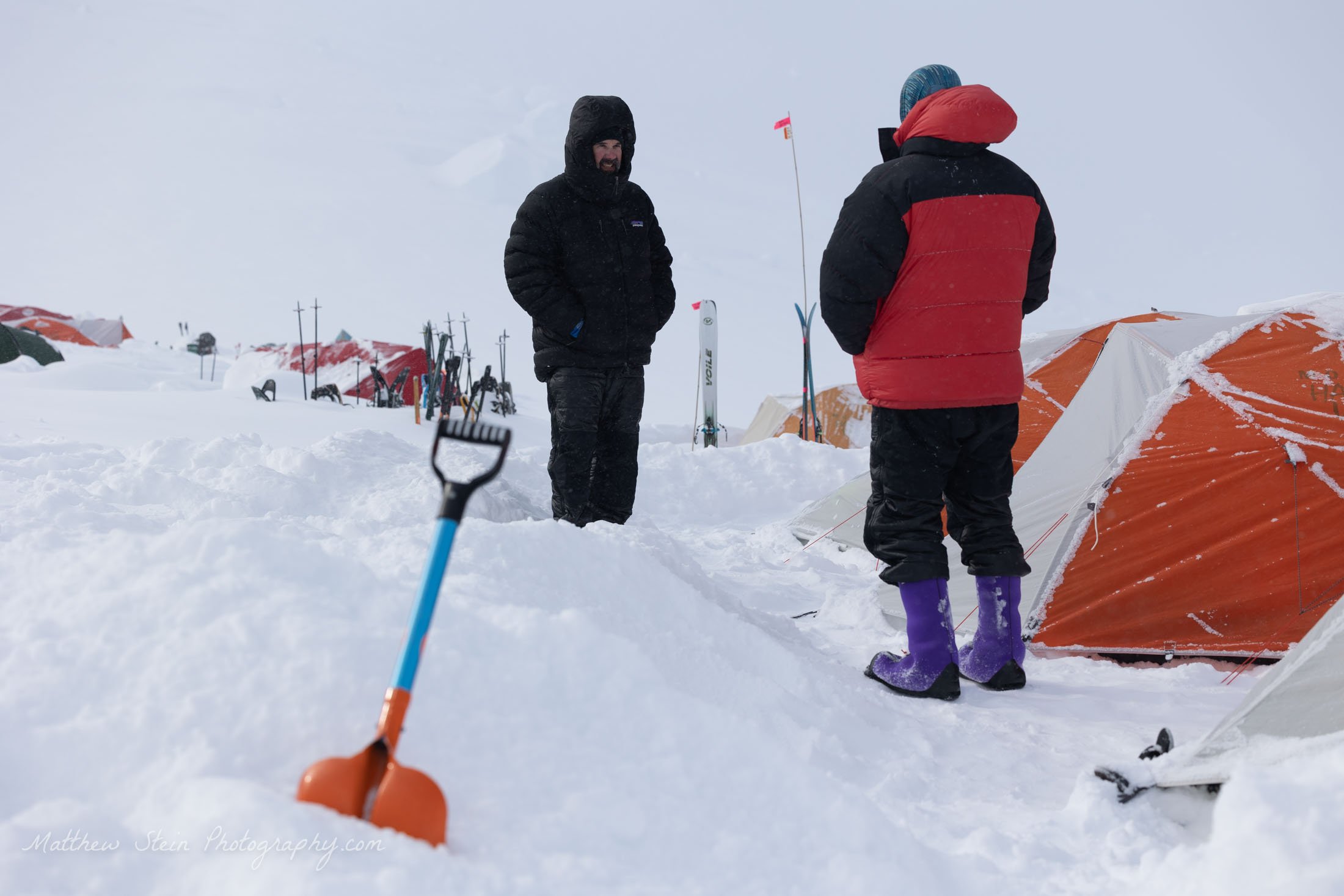 California talking to Canada Mike in his purple boots. 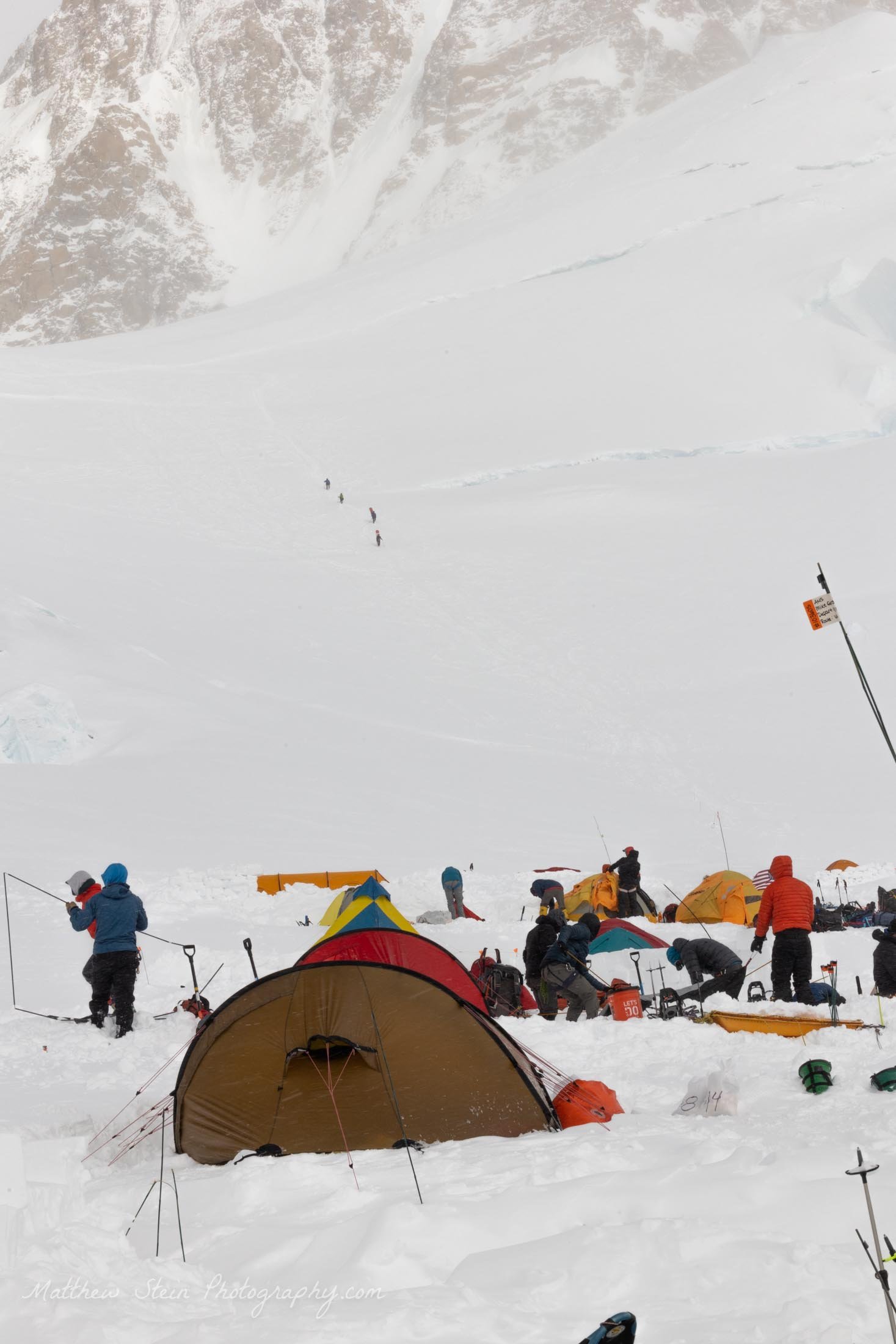 Team of 4 that turned around coming down Motorcycle Hill.