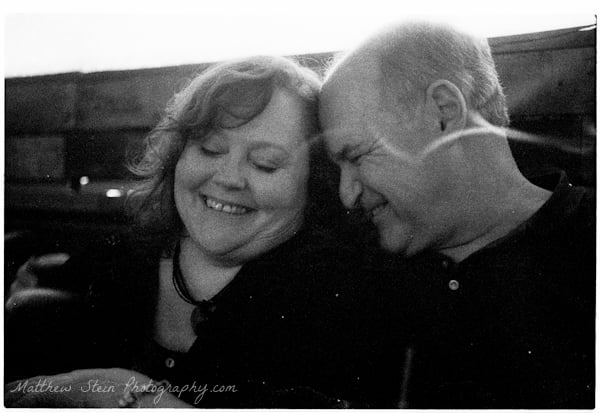 What not to do when developing film

Anyone can rattle off a dozen advantages of shooting digital over film, and some people can even name a few advantages of film over digital. Recently I developed my first roll of film in my basement. Yep, I ordered the chemicals, developing tank and reels, and went to town. Here's one of the mistakes I made, and you can hopefully learn from it.

Ken and Laura, with a crease in the film.

You see the light curves through Ken's head? That's a crease in the film. When I was loading the film onto the reels, I bent it just a little bit, and the emulsion got screwed up. Amateur mistake. It's not easy to load the film onto those reels. First of all, it's dark. (duh) Second, you want to avoid touching the flat part of the film, so you have to grip it by the edges. You have to gently wind it onto the reels so that the chemicals are able to wash the whole film, otherwise you can get chemical clouding.

Before you develop your first roll of film, here are some tips:

Now I have to decide if I want to go into Lightroom and try to fix this crease. It's a lovely picture of my half brother Ken, and his girlfriend Laura.

Have you developed film before? What mistakes did you learn from you wish someone had taught you?