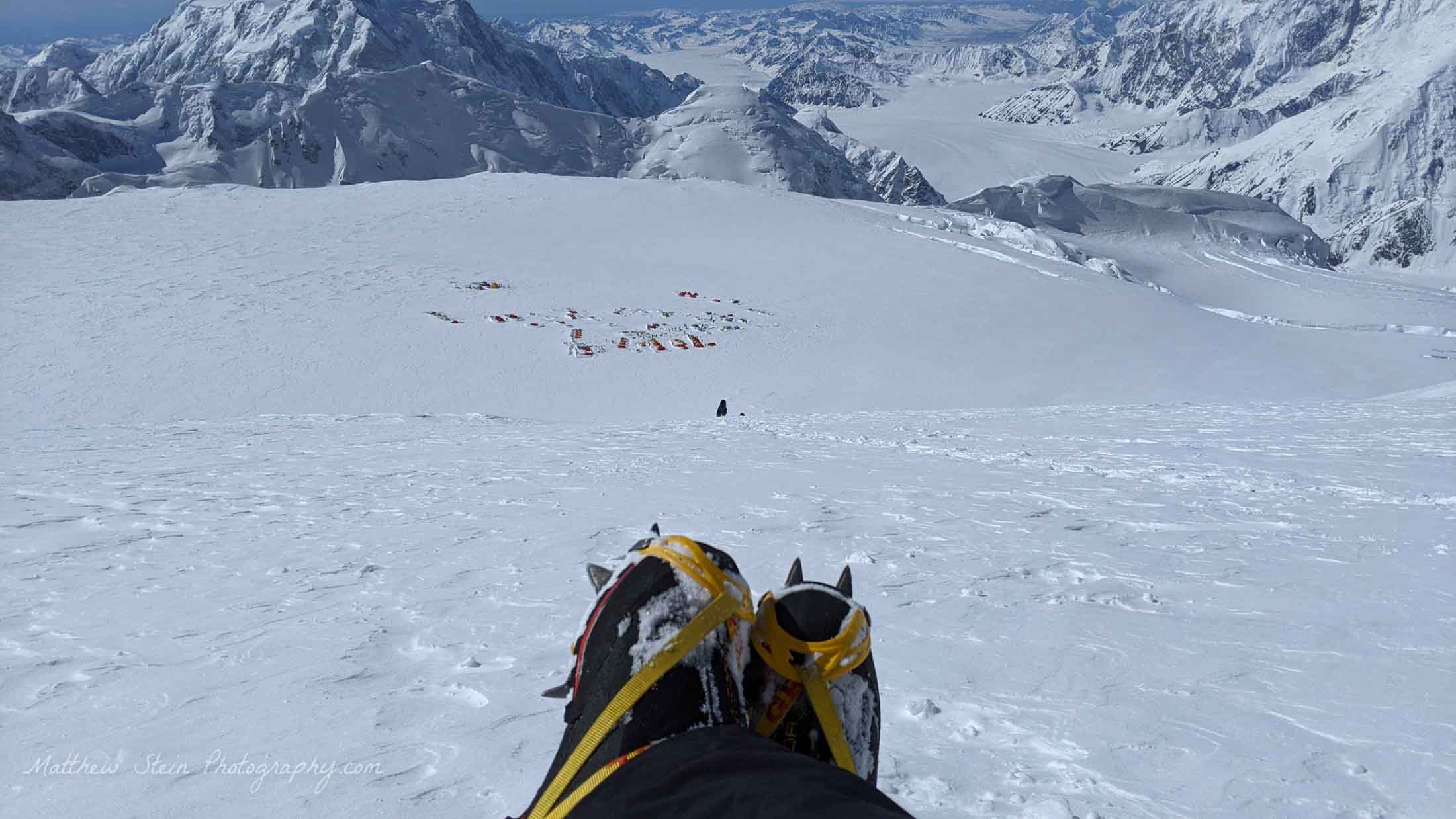 Hard day today. Heading up the headwall was our test. Are we fit enough? Can we manage the technical protection to stay safe? Can we handle that altitude? The exposure?

The morning was very cold with frost snowing on my head when the wind blew the tent.

Breakfast came after the sun was up and warming our tents. It was oatmeal with a crumbled 'fruit and nut' granola bar. I added a few dried cherries to mine, and shared them with Rhude Dog.

We were up and on the ropes pretty quickly. Today we went up the head wall with a very light load. Just our safety gear, cold weather gear and a small amount of group gear. I was at the back of the first rope, 2-sleep Mike's rope, with Brad in the middle. On Clark's rope, it was Sam and California. Peggy lead Canada Mike and Rhude Dog on her rope team.

2 hours up from camp to the start of the fixed lines. Then another hour or so from there. The steep snow slope in the beginning of the climb wasn't hard. Steadily up hill on a wind scoured crust. Not too deep, but enough to make us work for it. On the fixed lines, we were ascending 60-70 degree blue ice. Hard blue ice that didn't like my crampons. I don't have my good ice climbing crampons, just my cheaper glacier travel ones. They only have 10 points. I found some angles that engaged as many of those points as possible, but my ankles were getting tired with the repetition. No chance for a break though, I needed to show I could get to the top with no problems.

As we approached the top of the ridge line, we ducked around some rocks for shelter. The winds buffeted us and sapped away what warmth we had generated on the way up. These were some serious winds. 2-Sleep Mike told us to cover our faces with a buff before cresting the top. Once we got to the top and gained the ridge we only went 20 meters or so to shelter behind a large granite rock. We put on parkas, swapped glacier glasses for ski goggles, ate and drank something. This was as far as we were going today.

The second rope team with Sam and Brian joined us a few minutes later. Unfortunately, Rhude Dog and Canada Mike didn't make it all the way up. They turned around before the fixed line section.

Descending the steep ice of the headwall was challenging. First instinct is to step gingerly, but I knew that wouldn't work. I had to drive in my crampons with every step to be secure. That's not easy to do at these angles. It's not vertical enough to front point, on the way up. For the descent my best footing was sideways, foot pointing perpendicular to the fall line. I lost my footing once, but kept myself from falling using the fixed lines.

The view of 14 camp was stunning from above. Our little village of tents in a tight circle on a large plateau of snow. A few clouds dotted the sky, and we could see for miles and miles.

Dinner was one of the best yet. Rice with some kind of curry. It had green beans, carrots, mushrooms and a slightly spicy sauce. I hope my stomach agrees with it. The altitude has had my stomach a little off the last few days.

I got out of my tent to walk around for a bit. My backpack covered in frozen spindrift. I knocked that off and put it back in the vestibule strap- side down.

Sam and I took a walk and talked about how the day went, and wondered what it would be like tomorrow. Who was going to continue up for the summit attempt, and what about the rest of the team.

Before I crawled back in, I dug out sides of tent again. We would be sleeping in more wind again tonight.

Peggy's team coming up from 14 camp. This was our break half way up to the headwall. 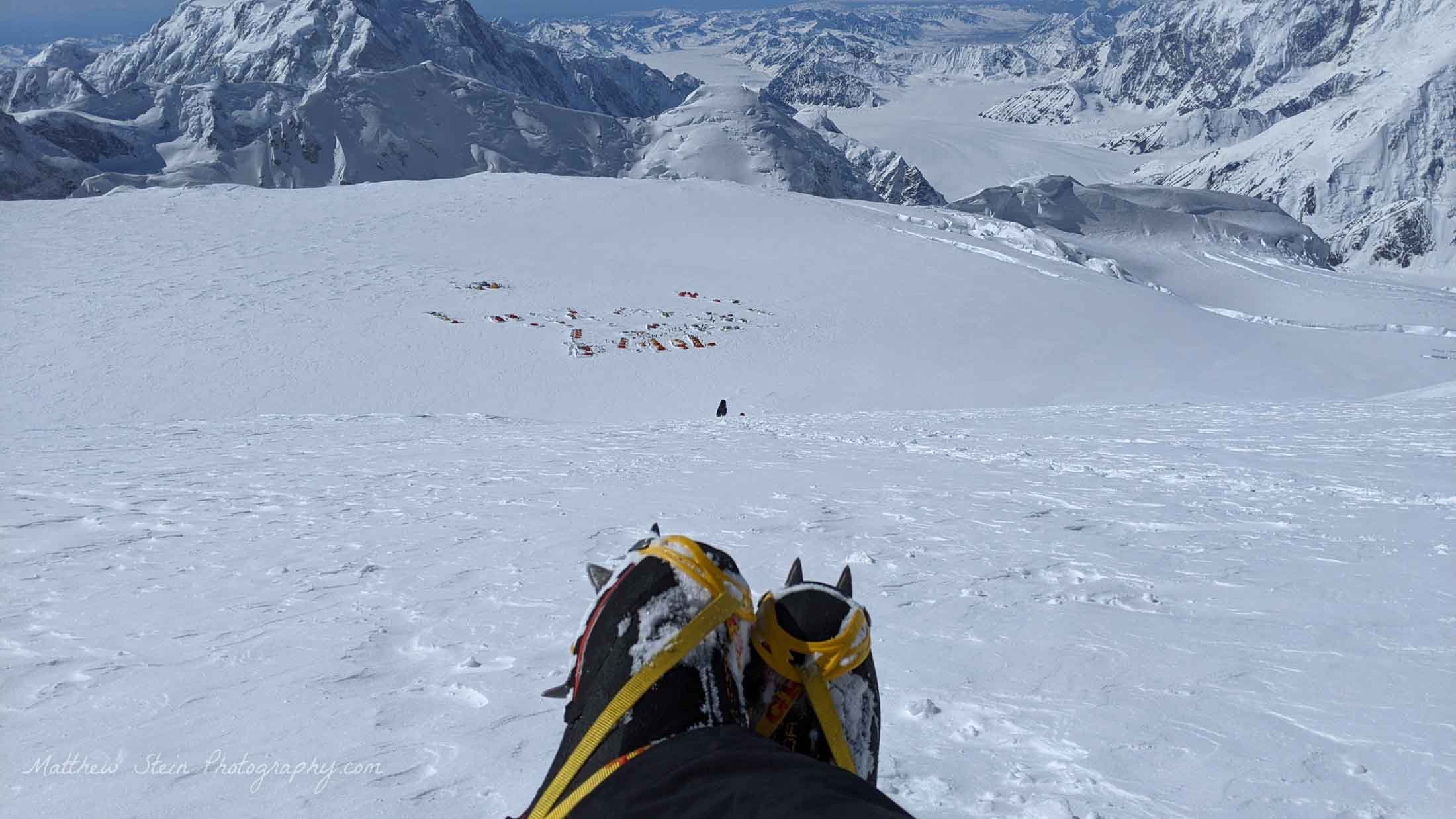 Sit down and take a break. 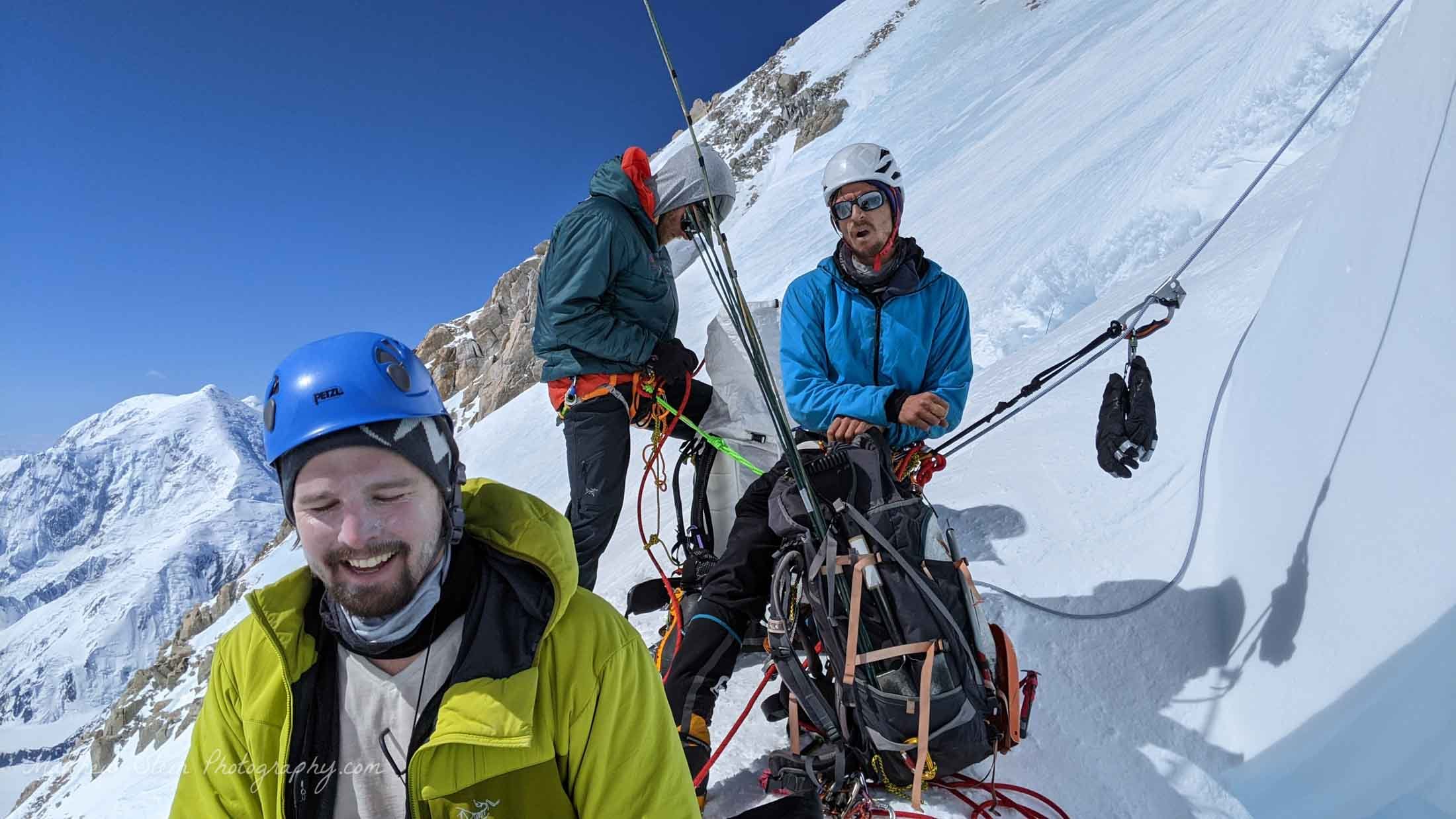 Brad, Clark and 2-Sleep Mike at the base of the fixed ropes. Getting ready for the fun part to begin. 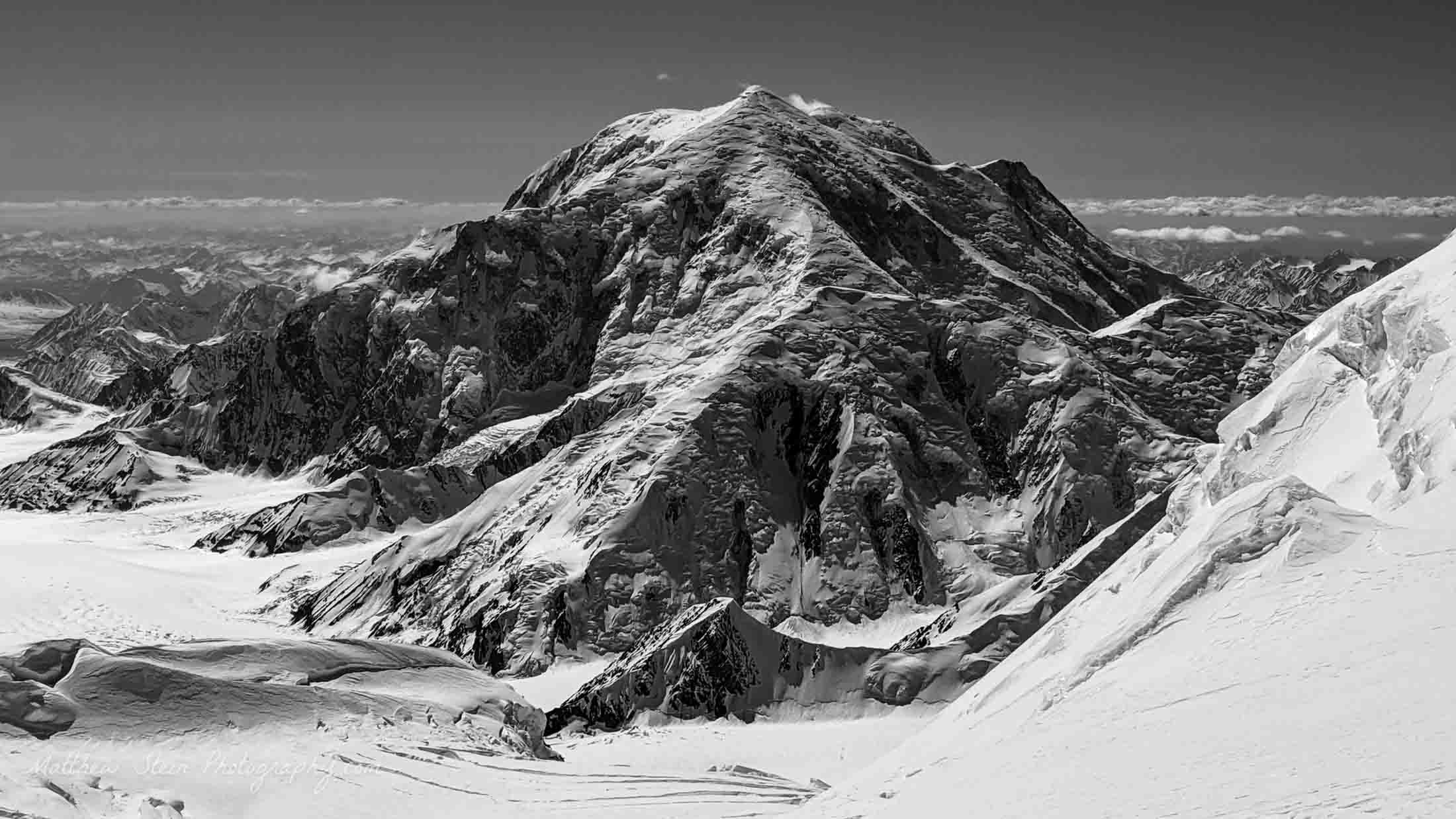 Classic shot of Mt Foraker from half-way up the headwall.