Snow storm. All night it pelted our tent and the wind howled. What would camp look like when we woke up?

The ceiling snowed on my face most of the night.i tossed and turned, struggling more to stay dry than warm.

After 8 I knew I wasn't getting back to sleep anymore. I ate the other half of a bag of peanut M&Ms, and listened to the rest of 'Born a Crime.' What a story.

Around 9:45 Rhude Dog and I started talking and decided we needed to exit the tent. It was covered and we had to dig it out. As we were putting on our hardshells and goggles, I heard 2-sleep Mike talking to Sam. We must have gotten 2-3 feet of snow overnight. Hard to tell with the wind drifting all around. Some places it was up to my waist.

Sam and I started digging out the tents, then Rhude Dog joined us in a bit. We have to use our gloved hands, because we can't use shovels close to the tents. No sharp tools near the tents, ever. A rip in the tent fabric would be catastrophic at this stage. It feels like I'm a kid again digging in the sand at the beach. Except it's cold, hard work and there's no ocean nearby to swim in.

Some teams fly flags at their campsites. American Alpine Institute always flies the Stars and Stripes. At 14 camp this year we also saw the Russian flag, and the Argentinian flag. They were flapping pretty hard in this wind,.

After digging out the tents, we crawled back inside to get out of the wind. Breakfast turned out to be more like lunch. At 11:40 we got bowls with cinnamon raisin English muffins and a generous amount of bacon. The guides were busy digging out everything else around camp. Their tent, the group sharps pile, and a new latrine.

After eating lunch and reading some more I decided I couldn't stay in the tent any longer. The winds hadn't died down much and the snow was still blowing. We dug out our tents again, and several of us started to strategize about more snow walls.

The existing walls behind our tent we now rendered useless. The snow fall in the area behind them equalled them in height. No wind break for us anymore.

2-Sleep Mike showed us how he likes to start a snow quarry. These blocks were much larger than the ones we dug at 11 camp. We excavated blocks approximately 16"*16"*28". These blocks lined the top of the existing walls, which were a patchwork of ice and oddly shaped chunks of compressed snow. We stacked 2 layers of blocks all along the backside of our 4 tents. Wrapping the walls around to the front, we tried to get as much protection as possible.

After a few hours of that we started to take breaks. Food, water, warmth all helped fuel us for the next round. Reinforcing the piles at the front of our tents, we started to make some real protection from the winds.

Why were we doing this after being in camp for a few days already? Yes, we had just received a blessing of snow from Denali. But the real storm is still to come. In 2 days, Saturday, the weather report calls for another, more severe snow storm. We wanted to be prepared.

Sam, Brad, California and Canada Mike were busy digging out the space around our tents. The walking areas had been piled up and walked on, leaving us less room for snow drifts. That would make it harder to clear the tents. They removed the snow from between our tents to build up the walls in the front.

I started quarrying blocks from the consolidated snow leaning against the back wall. This gave us more room behind the tents and provided more substantial building materials for the front walls.

We made good progress, but there's still more to do tomorrow. I really want to build a key-stone arch over one of the exits in the wall. There's no rational, reasonable, or functional reason for it. It'll just look really cool.

Instead of Miso, tonight's soup was cream of broccoli and potato. Just the thing to warm us up after a hard day of snow masonry. I'm not going to lie, I was pretty excited to see green bits of something in my food. The broccoli was just the thing.

The other smaller AMS is likely heading down to the airstrip tomorrow. 14 camp was as high as they got. It looks like several of our teammates will be heading down as well. Rhude Dog, Canada Mike and Brian will likely go down tomorrow morning if the weather is good. The only climbers going up for a summit attempt are Sam, Brad and me. The team just got cut in half. It's going to feel very different tomorrow.

For Dinner we ate chicken quesadillas. They were ready on the early side, around 6:30.

I woke up this morning feeling tired of the mountain. I wanted to eat at a table, not in a tent. I wanted to stretch my legs or arms out at night, not be swaddled in a sleeping bag. It's been two weeks. I knew this was what I signed up for, but it was beginning to get to me. After the work of today, and seeing how close we are to getting our shot I've rallied and am excited again. The stoke is back. Now we just need the weather to cooperate.

Thick clouds meant evening grew cold earlier than usual. We huddled up in our tents waiting to see how well our fortifications will protect us tonight. 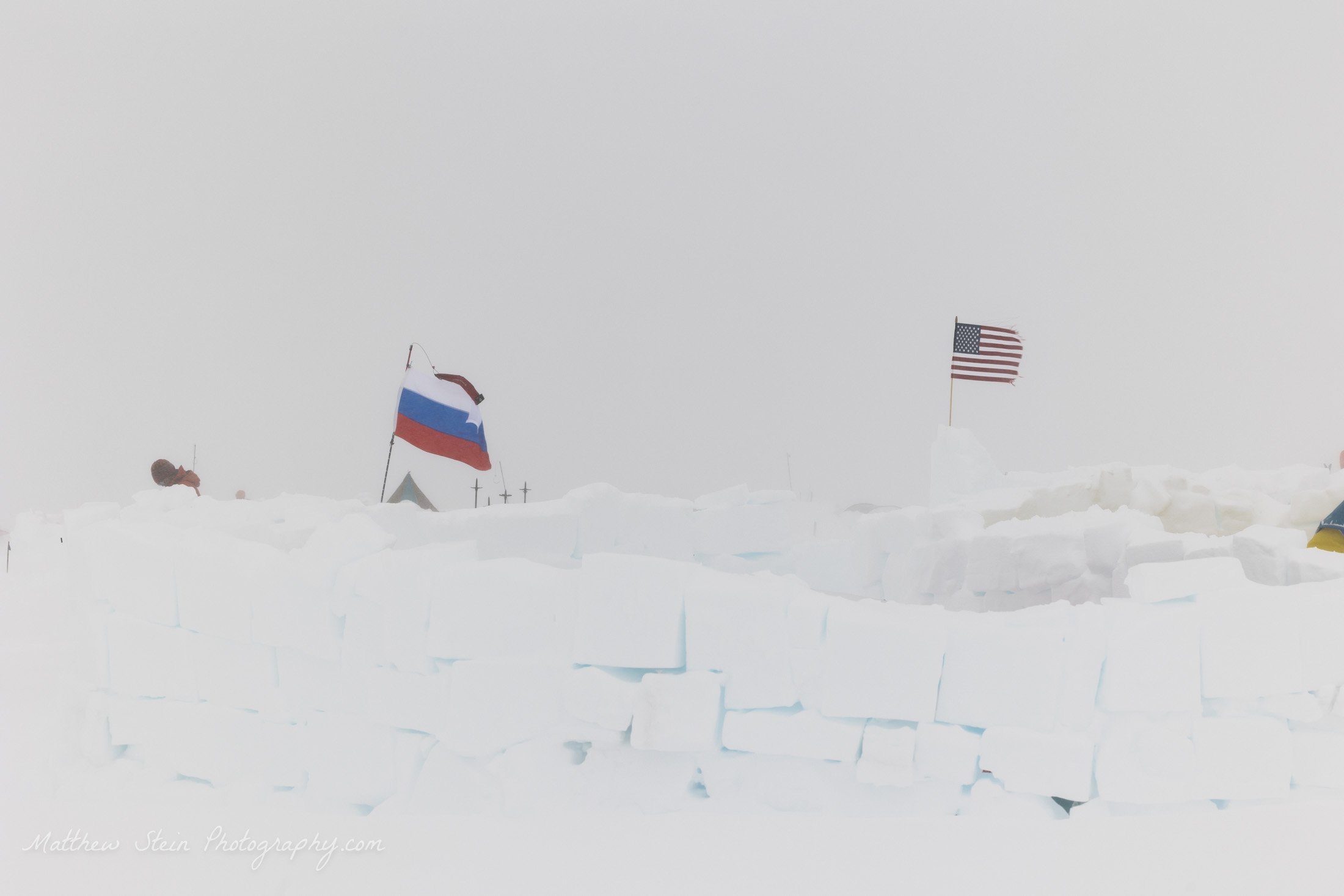