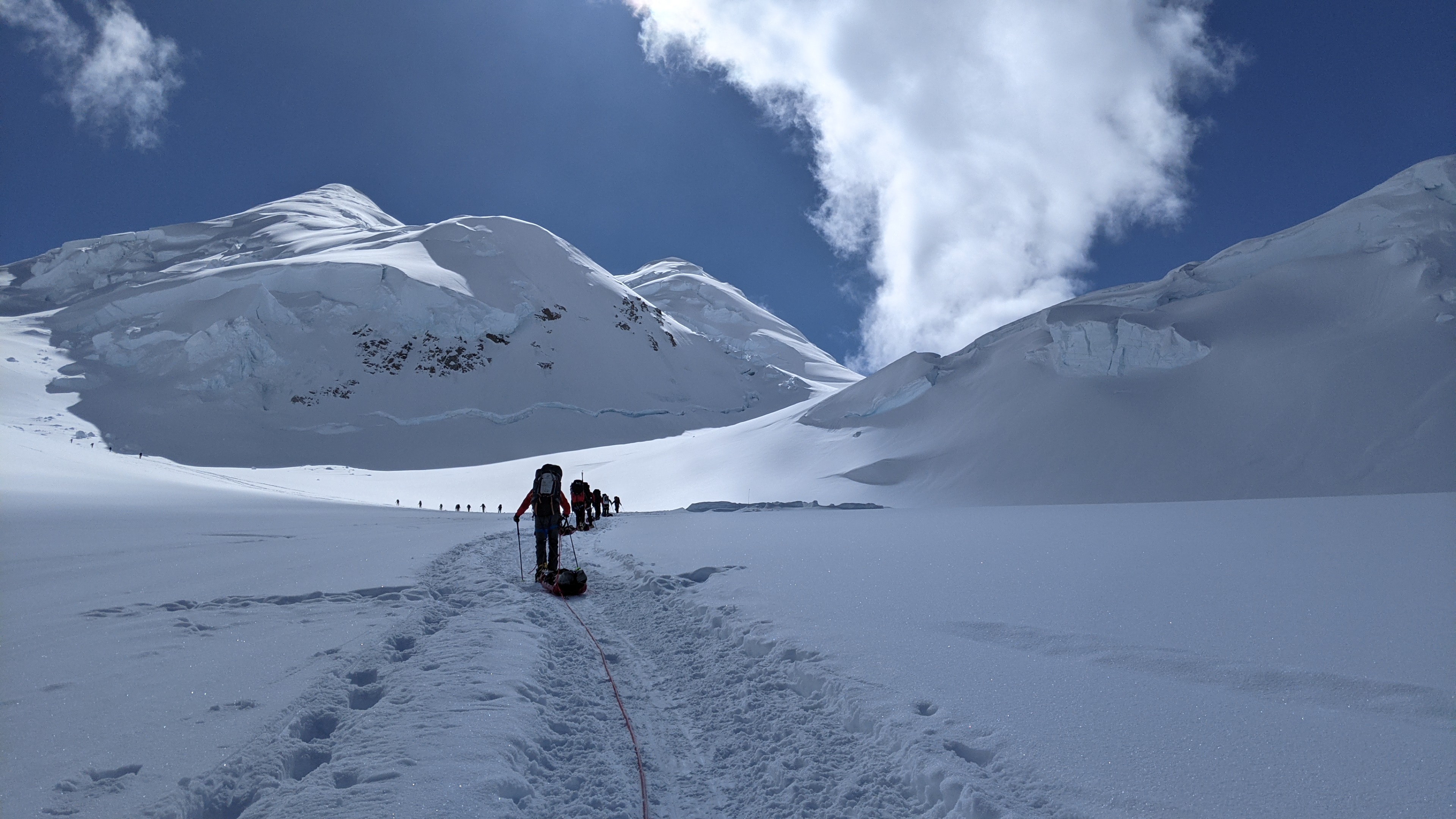 Today we woke at 3am for our move to 11 camp. We broke down our tents, packed up everything and stepped off just before 6.

Breakfast was goatmeal. Oatmeal with some crunchy granola bars mixed in. If I write a camping cookbook, that one's going in it. The texture variation helps make it a little more interesting.

It turns out 2 packets of Starbucks Via is too much for me in the morning. My stomach was not happy with that much caffeine. I make my morning hot drinks in a 20 oz Yeti thermos, and then I have 2 single liter Nalgene bottles of water for the day. I finish the hot drinks first thing in the morning to kickstart my hydration. Then I'll usually mix one bottle as Tang or Gatorade, and keep the other one as clean water.

We were a little slow to get on the line this morning. There's a lot of rigging involved with glacier travel, especially when pulling a sled. It all has a purpose, and I was happy to learn this system from AMS. For example, should you clip your backpack tether into your harness, or directly into your knot on the rope between the climbers? I'll give the answer in Day 5's post.

At the 1st break, California had to wipe his ass. He made sure to announce it to the team as we pulled over for a break. When we take a break, there's a specific way that we line up. The first rope team leader turns around and calls to us to move off to the side of the trail. We have to move to the side at the same time to keep the rope tension the same. Too much slack and we could fall into a crevasse. We're tied into the ends of a 60 meter rope, so there's 30 meters between the three people on the line. The other two rope teams continue up hill until they're along side us and then they also walk to the side of the trail, with the third rope team doing the same.

All the guides are together at the front of the ropes, the middle guys sit beside each other, and I'm at the end of the rope in the back with Brian and Sam. It's important to understand the distances here. California told us his warning and then dropped trou. He provided an unfortunate play by play as I was eating a snack. Half a bagel torn to pieces scooping out some peanut butter. I tried not to think about how similar that looked to was to what California was dealing with.

From 60 meters away, we hear a horrified 2-Sleep Mike yell out "Brian, did you just shit on the trail!?"
"No, I'm just wiping my ass"
"Well what were you doing right before that?"

We're all dying here as this plays out at full volume. There's also another rope team approaching from a couple hundred yards away.

I'm not sure if that's an exact quote, I was laughing too hard at the time.  A few minutes later, we had almost gotten over this, and were wrapping up our self-care at the break. That was when the next rope team approached us to move past us. Three traumatized climbers slowly moved up the hill. We exchanged the typical mountain pleasantries as the elephant on the glacier went un-mentioned.

Approaching 11 camp I could see a steep far ridge. I tried to steel myself to climb it, but it had been a long day. As we worked our way up the rise in front of us, the tops of the tents camp revealed themselves. 20-25 tents spread across a plateau surrounded by high walls and monstrous seracs. The face of the West buttress stood imposingly in front of us and high snow walls lined the campsites.

We dug in, starting to make our tent platform. This involves taking a sloping section of glacier, shoveling it roughly flat and stomping it even flatter with snowshoes. It's a hell of a lot of work. I got to shoveling and made some headway. But, then I realized I was a lot more worn out than I thought from the hike plus altitude. I bonked. So I stopped, ate and drank and after a few minutes felt better. I was able to go back and help the group get our tents set up. With the tents up, and my sleeping pads deployed, I lay down for 5 minutes for another break. I needed to get out of the punishing sun for a bit, then squared away the rest of my gear.

During our afternoon naptime I peed twice, nearly overflowing my pee bottle. The third time I got up and walked to the latrine. At least I knew I was hydrated again. I kept eating snacks and read more Brandon Sanderson's "Well of Ascension." I listened to Clifford Brown, Lady Gaga and Young Blood Brass Band.

I was wearing my glove liners at one point in the climb but my hands were still cold so I shoved them into my ski gloves. Unfortunately, they were too tight and I've busted through 4 of the finger tips now. I should have brought the extra liners I left at Talkeetna.

For dinner we started with a miso soup appetizer. It's a perfect salty, warm snack. Then we ate Mac and cheese with salmon jerky. This was one of the best meals we had on the mountain.

Late afternoon clouds obscured the strong sun and the temp dropped quickly. It was a chilly night. I woke a few times, but some pressure breaths got me warm enough to sleep again. 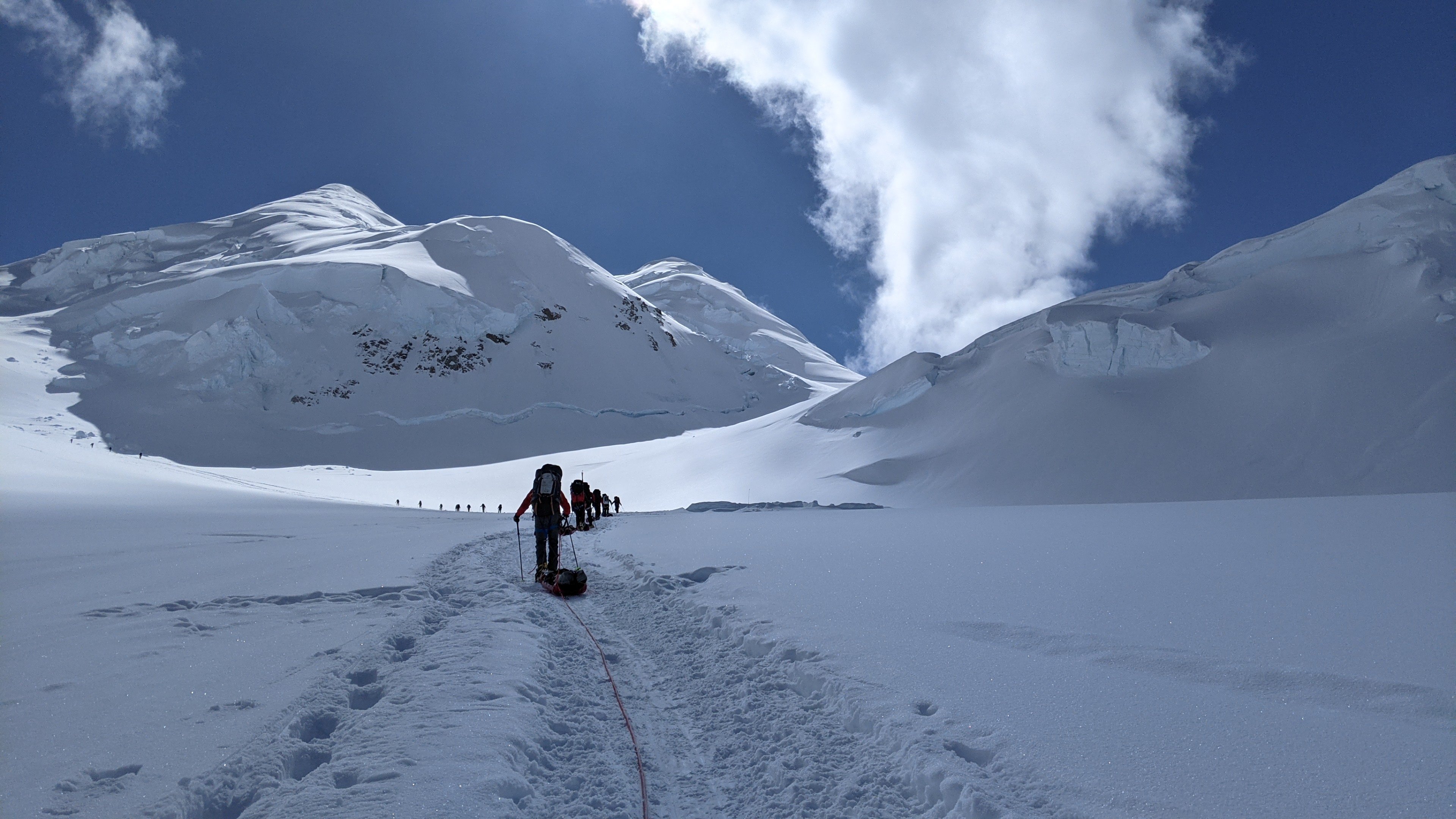 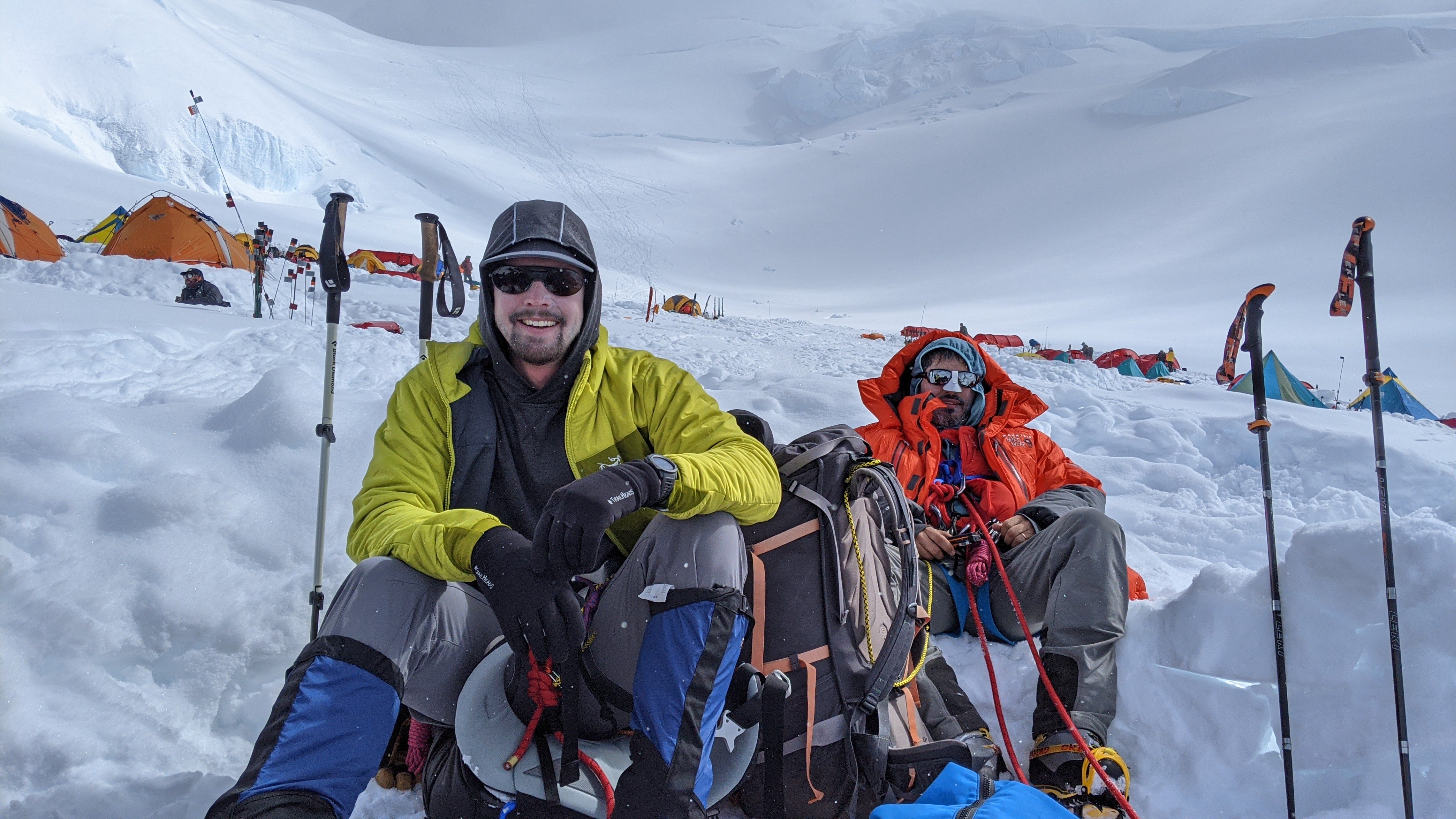 Happy Brad and tired Sam with Motorcycle hill in the background. 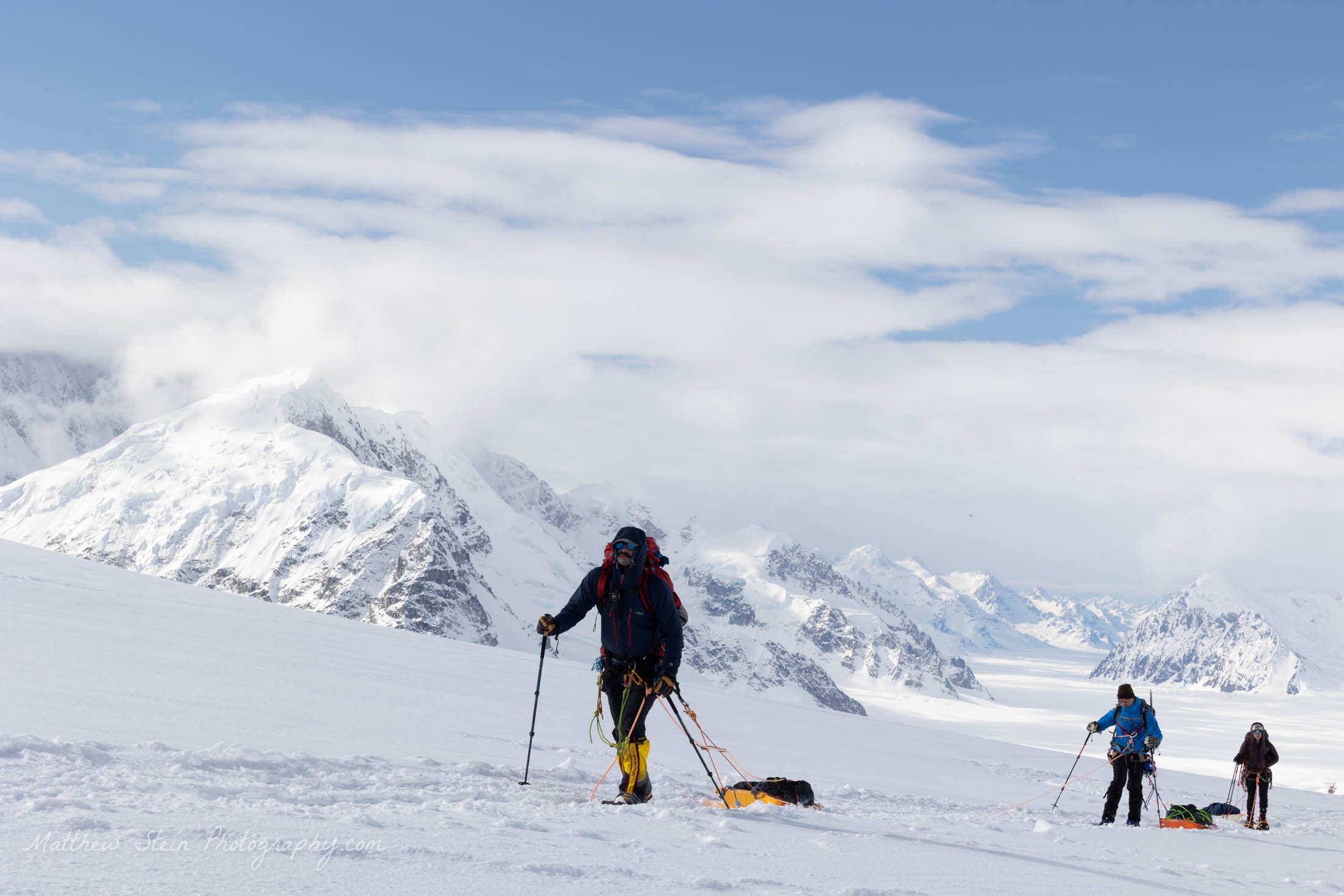 This was not the traumatized rope group. It's another team, with a similarly beautiful backdrop. 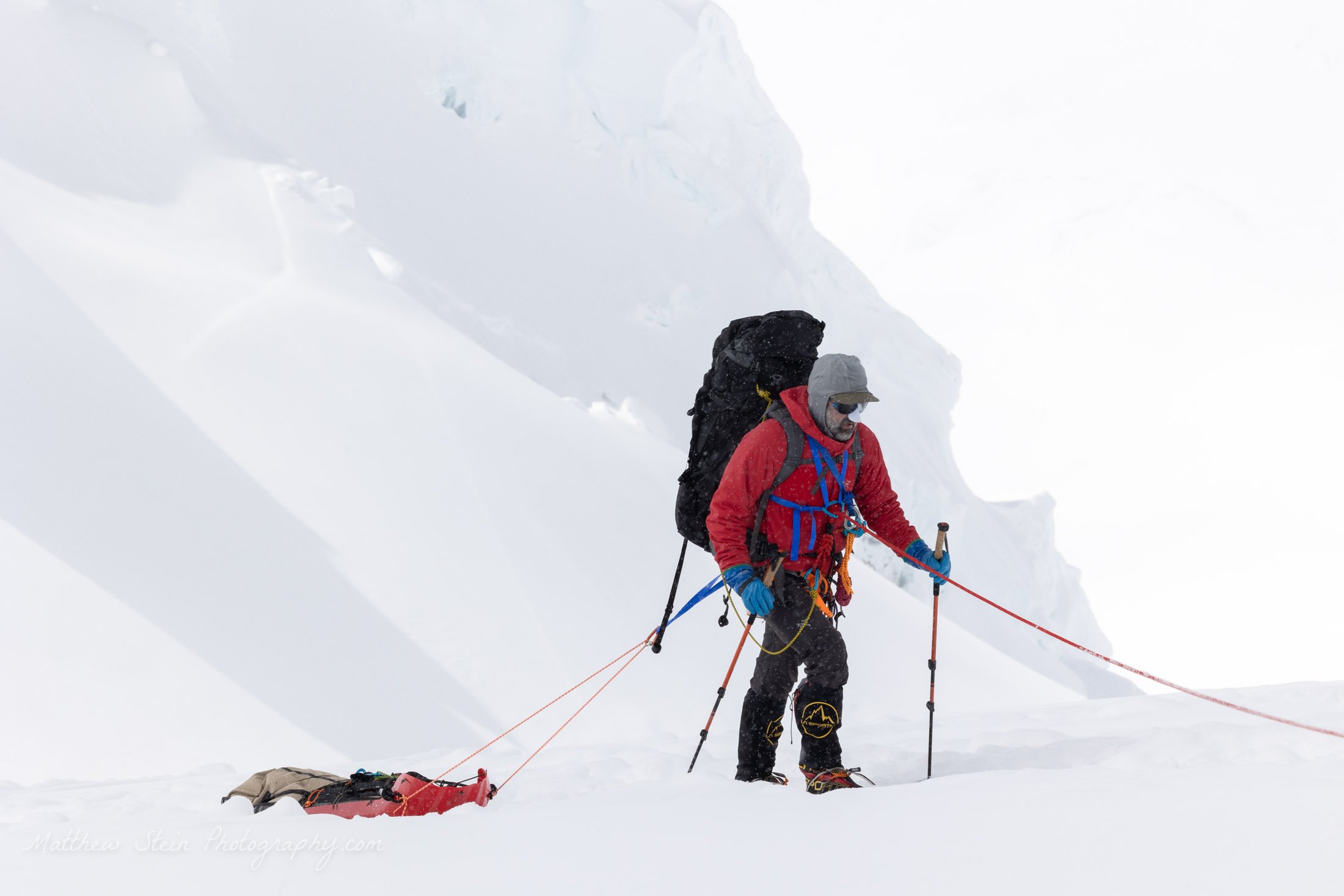 California pulling into 11 camp with a full load. 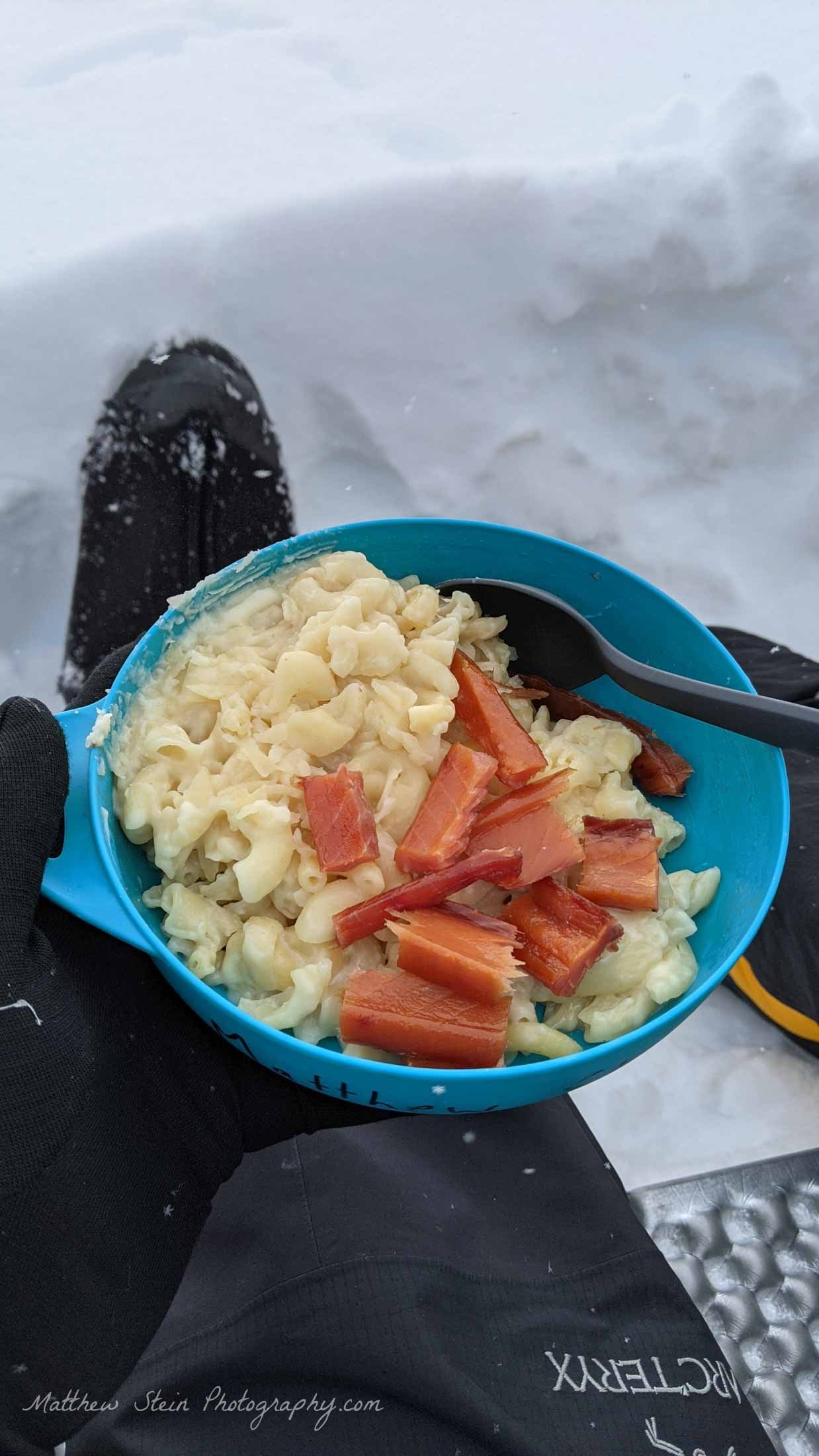 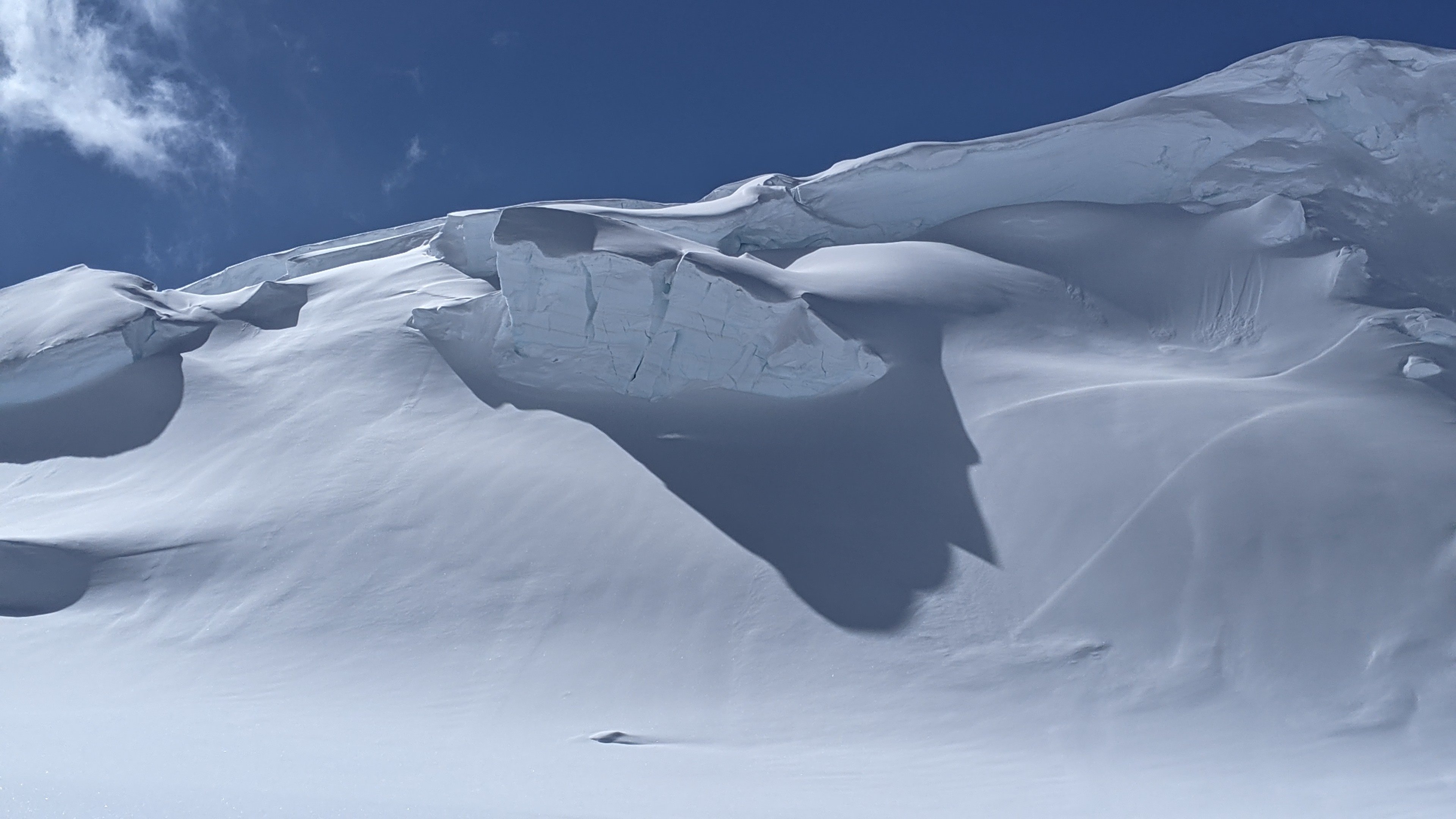 Face shadow on that wall!