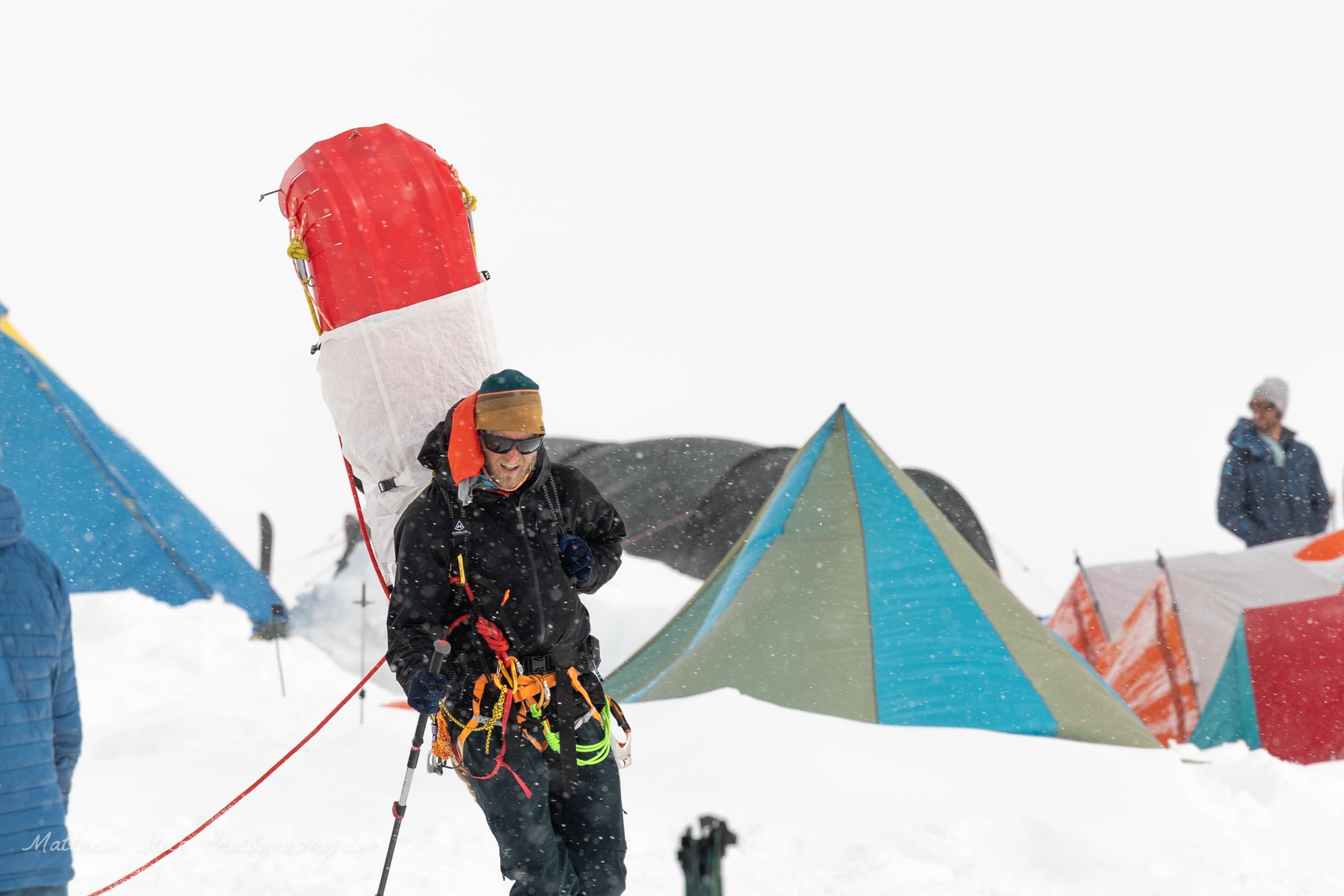 Woke up about 4:30 to the sound of no wind at all. I started thinking we might be able to move up today. A few minutes later it starts shaking and I can hear the snow pelting our tent. No such luck. I went back to sleep

Peggy faked us out delivering thermoses for hot drinks to the back vestibule of our tent. By the time we figured that out, they were luke warm drinks.

I shot a video 'Cribs, Denali tent edition' to record a tour.

Breakfast came around 10:30. Pancakes with raisins and syrup. Nice.

I floated an idea to 2-sleep Mike. Another AMS group at camp was down to just 2 climbers and 3 guides. Between their team and our team, we might be able to take the strongest members and put in a cache despite the wind and cold. He told me it wasn't about how strong we were, it was about exposure. He has zero tolerance for frostbite. In these winds, exposed skin could start to get frostbite in about 20 mins. Plus, there was no way to know what it would be like above squirrel hill. Alright, I figured that was the end of that. A few hours later, 2-sleep Mike came back to talk to our group.

"OK we're going to take 2 guides from each team and head up to put in our cache."

Maybe it was a good idea after all. That still meant another rest day for us

The 4 of them roped up with loaded backpacks and sleds. They headed up Motorcycle Hill while it was still snowing.

I reorganized my food and gear another time. I slept when I could, read when I could. Rhude Dog and I talked about his boundary water trips and shared biking stories. By mid afternoon we were all getting antsy.

All the wind blown snow covered our walking paths and filled in our latrine. Sam suggested we do something about that. First we scraped off the paths we stomped out. Then Brad and I decided we were going to build a wall around the latrine. I started a small snow quarry and dug out a few blocks. Then he took over excavation and I became a snow mason. The wall was starting to take shape when Peggy came out to check on us. We had to stay inside the probed area of camp because there could still be cravasses around here.

Peggy shook her head. Our blocks were uneven sizes, and they weren't flat on top.

"Fine" we said, "We'll just tell Mike that you forced us to do this"

"That won't work. We usually teach the class on this at 14 camp."

"OK, then we'll just tell him that you built this."

"He'll never believe you. I wouldn't build something that awful."

Peggy's got a wicked dry sense of humor and this trip is a bunch of sarcastic smart asses. I love it.

California joined us and started excavating blocks while Brad and I tightened up and squared off the wall. We asked him for good blocks he sent us trapezoids.

"Come on man, there isn't a right angle anywhere on this thing! Cut them like good blocks of Cheddar."

Brian handed us a skinny triangle. "Here you go, there's a wedge of parmesan for you."

We finished up the snow wall around the latrine and it looked great. Brad, ever the engineer, shaved the blocks to look more square and matched and even put some ornamentation on the corner piece near the entrance. Then a few of us built some wind break walls around the front of our tents.

Time for a drink, a snack and a nap.

After all that was done, we saw the guides coming back from their cache trip. They took less than 10 minutes to descend motorcycle hill and get back to camp. They returned victorious. I snapped some pictures of them coming back.

They told us the weather was marginal up there. It was better that we didn't go as a team.

Meanwhile, everything inside our tent was wet. Frozen condensation had collected on the bottom of our tent, and the snow blown against it was melting and seeping through. I used one of my buffs to dry off my gear, wiped down the walls and collect all the water and ice at the front of the tent. I hung it to dry inside the tent and it dripped cold water on my head. So I wrung out the rest of it outside and hung it back up. The wind blew hard again after letting up in the afternoon.

Regretfully, I read the final pages of The Well of Ascension. I wish I brought the next one. Instead Brad and I traded books. He lent me Scott Lynch's 'The Lies of Locke Lamora.' I started that. It's good so far.

Dinner was pasta and pesto. The basil was a nice fresh flavor, it's been a while since we've had fresh vegetables. I should have brought a tiny pepper grinder, or at least some pre-ground pepper.

I switched around my sleeping pad so my head is at the back of the tent. The snow platform under our tent continued to settle. My feet were noticeably higher than my head and it's harder to sleep that way.

With these cold temps, we won't have an early start tomorrow for sure. Maybe we can move to 14 camp tomorrow.

Clark returning from the cache trip up to Windy Corner. 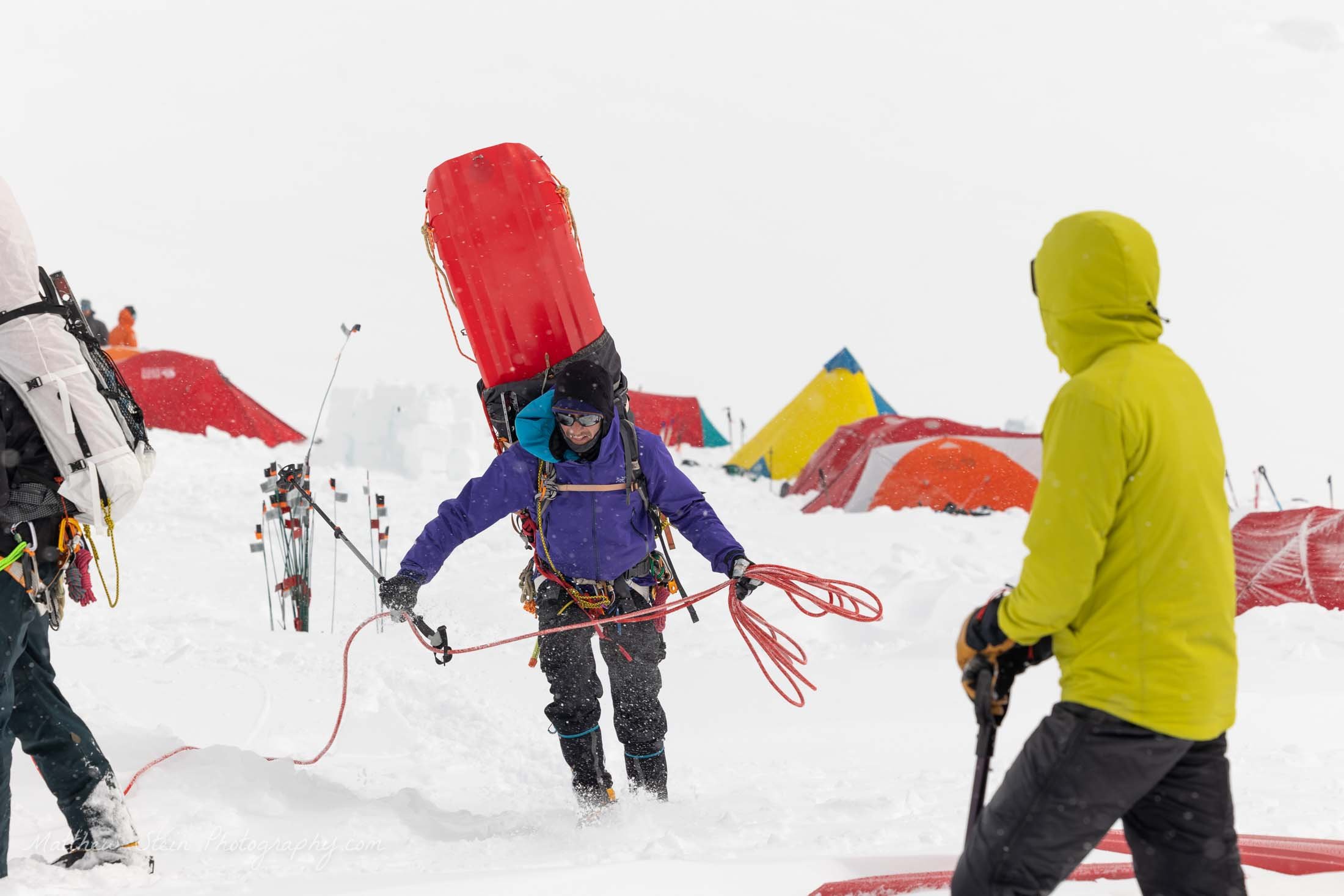 2-Sleep Mike coiling up the rope as he returns to camp. 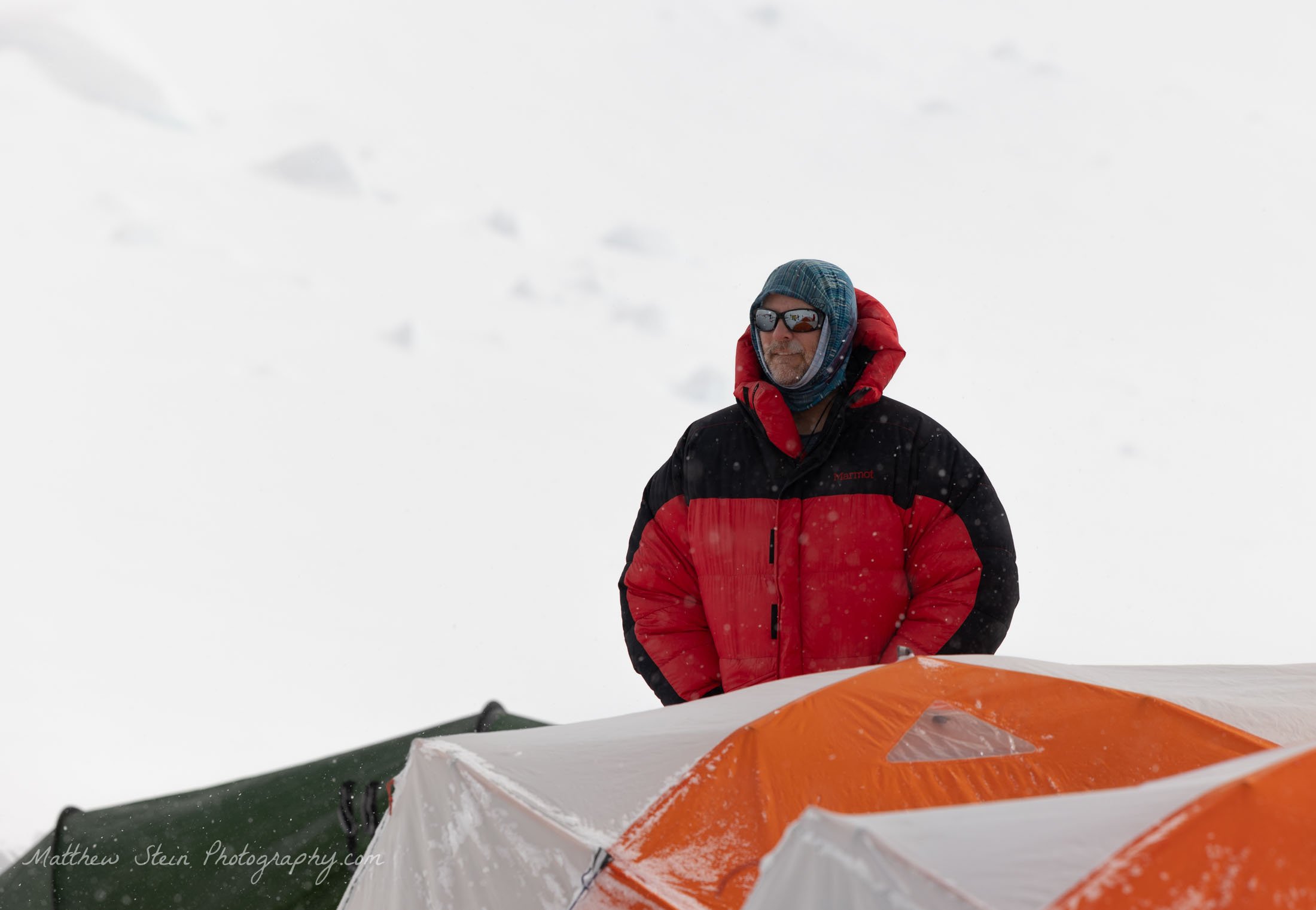 Canada Mike admiring the setting while trying to figure out what he wants to do today. 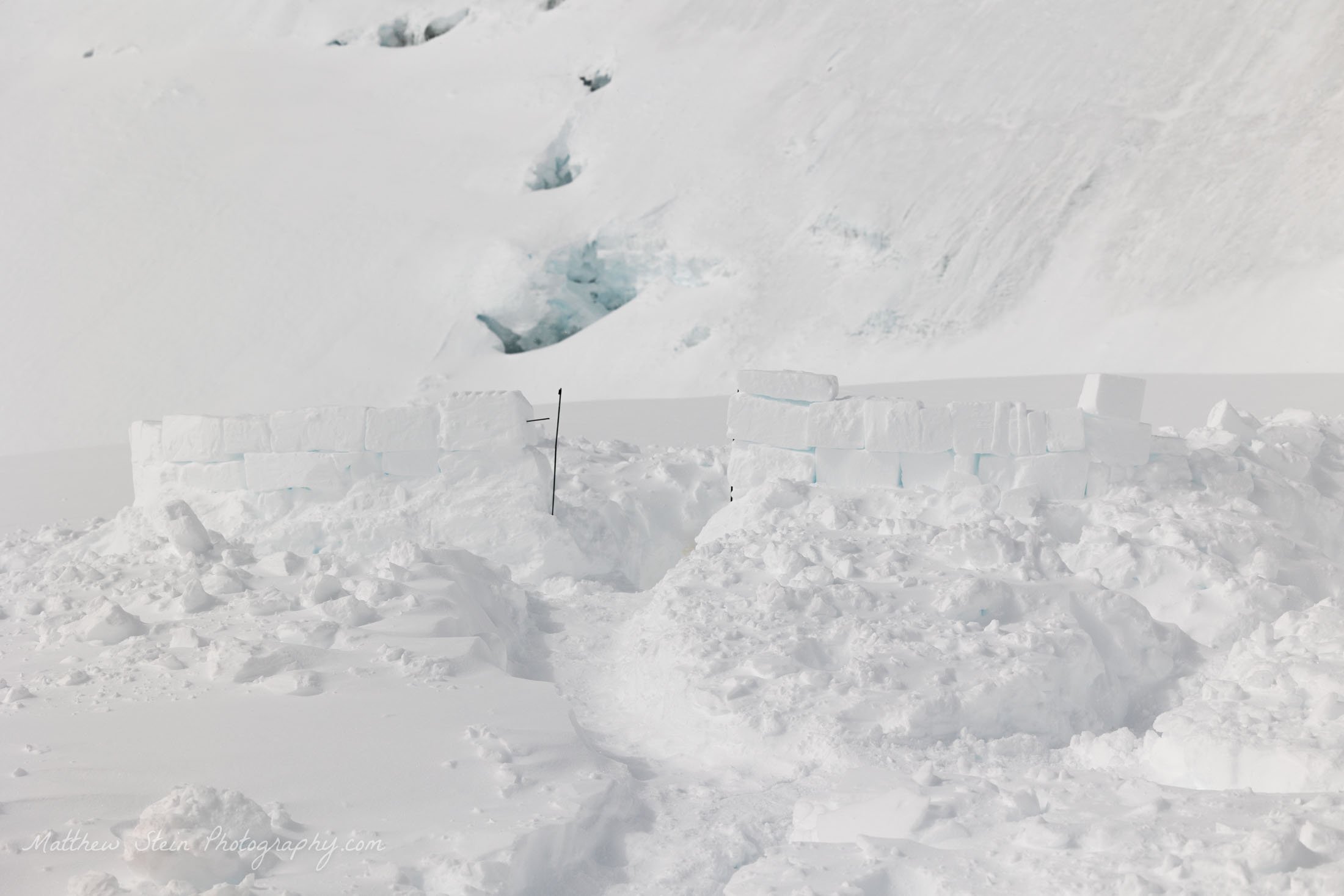 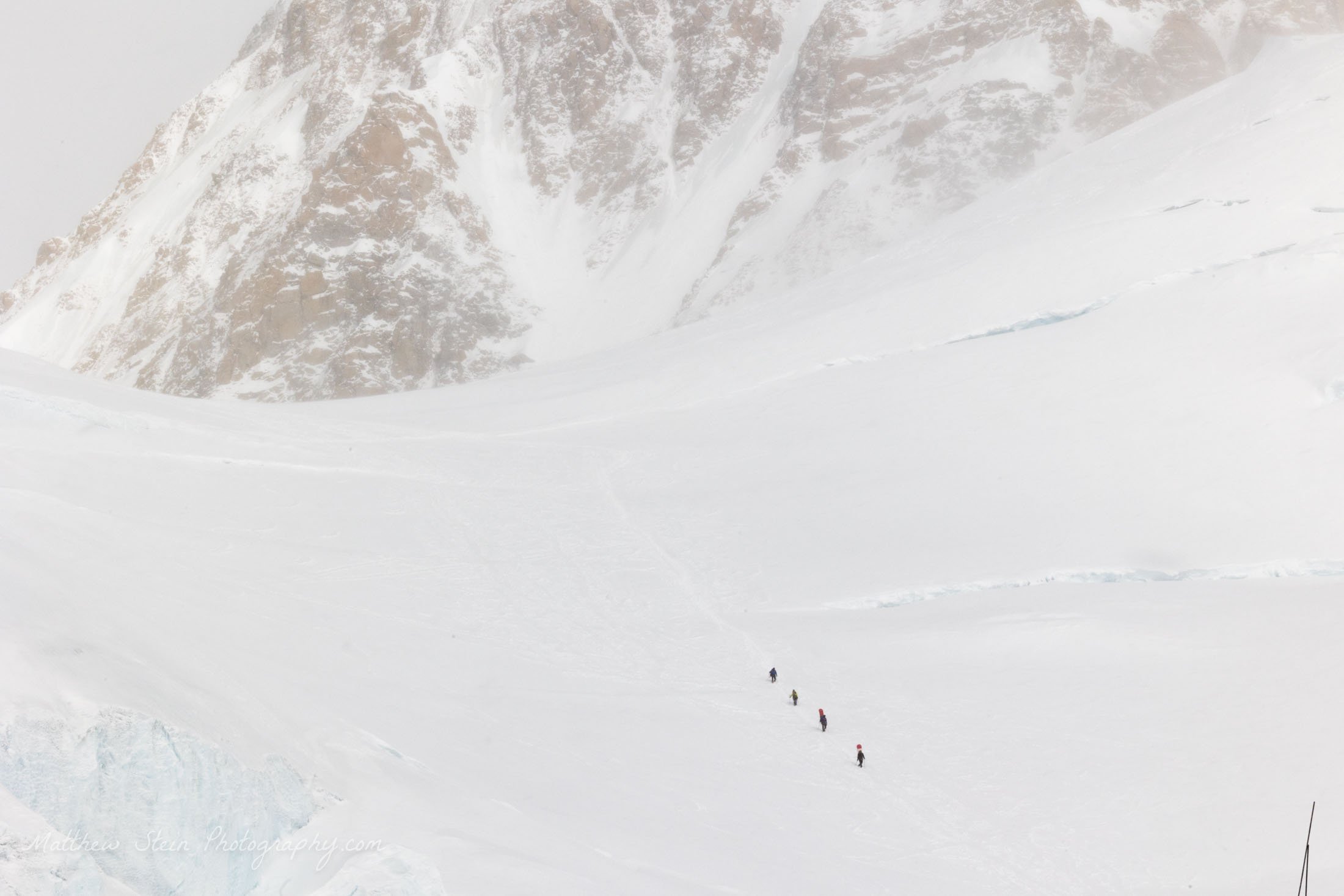 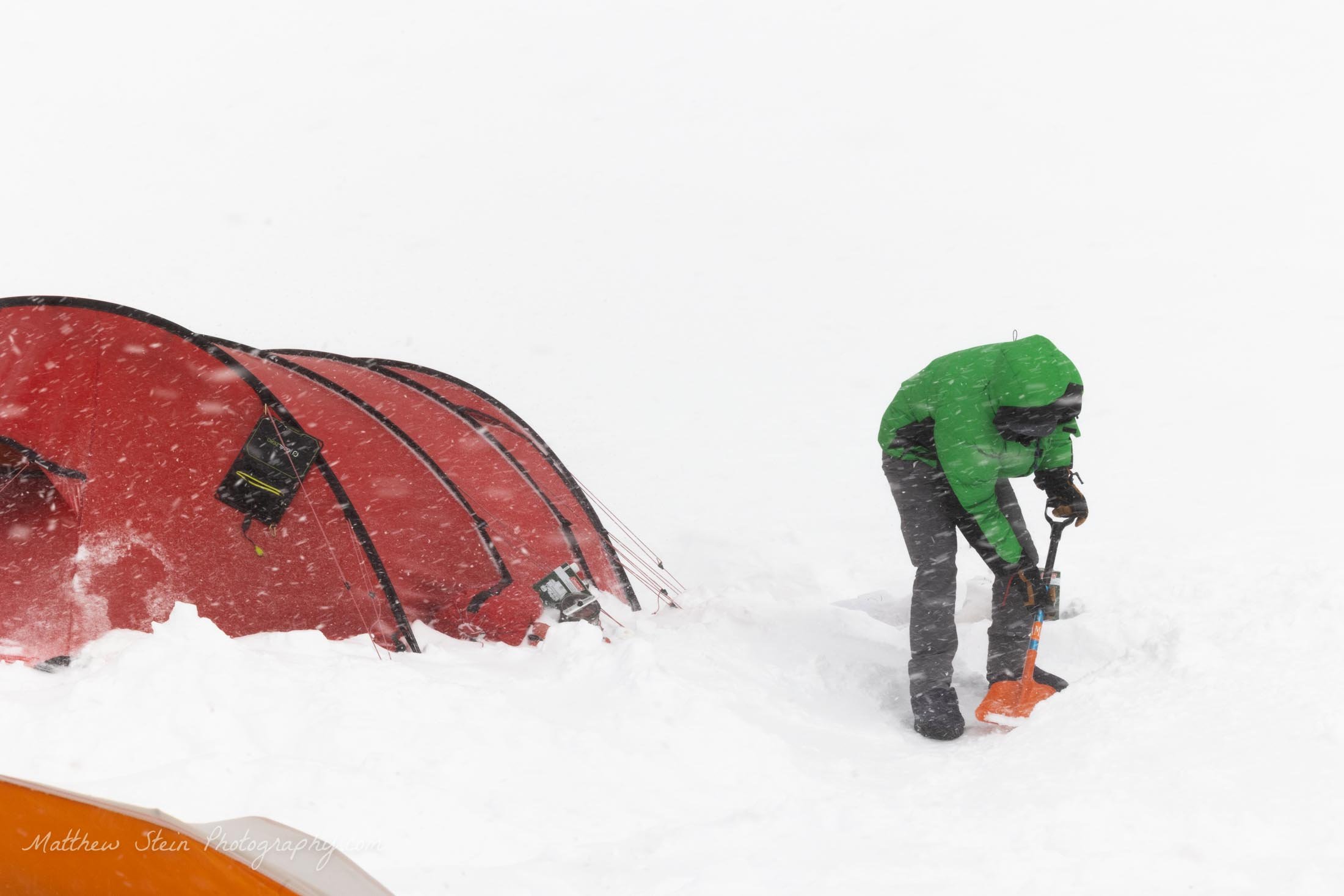 Sam clearing the walking path to the guides tent.